Terphane Announces Next Step in Strategic Partnership With Avantium 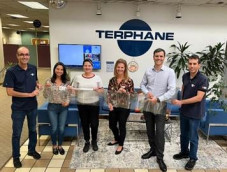 Aligned with the global trend to develop bio-based materials, Terphane, a leader in PET (polyester) films in Latin America and an important global player with operations in Brazil and USA, is strengthening its partnership with Avantium, which began in 2020, to develop a PET-based film partially made from PEF (polyethylene furanoate), which is 100% plant-based and is fully recyclable. This new film is currently being tested in Terphane´s factory in Bloomfield, New York.

According to Marcos Vieira, global director of R&D for Terphane, “The development of this film will be critical to our efforts to meet this new global demand for sustainable flexible packaging solutions. The film is partially made from PEF and has all the traditional properties of a regular PET film, including post-consumption recycling. In addition, PEF provides an excellent thermal resistance and superior barrier performance, extending the shelf life of the packaged products.”

Vieira adds that initial tests in the U.S. proved the material works perfectly in extrusion lines.

Recently, Ambev announced a new partnership with Avantium to use PEF from Avantium’s Flagship Plant in its portfolio of multilayer bottles for soft drinks in Brazil and Latin America.

A pioneer in the renewable and sustainable chemical industry, Amsterdam-based Avantium’s main product is the innovative PEF (polyethylene furanoate), based on FDCA (furandicarboxylic acid) from plant-based sugars. Avantium is currently constructing the world’s first commercial plant for the production of FDCA that is expected to open by the end of 2023, enabling the commercial launch of PEF in 2024.

“As a result of this important step in the research and development of bio-based materials for packaging, Terphane is preparing to offer its customers different and innovative polyester films,” said Célia Freitas, business development manager at Terphane. She notes that the main applications for these new films include coffee, powdered milk and bag-in-the-box packages for multiple uses.

Beginning in 2025, Terphane expects to produce around 2,000 tons of these renewable and fully recyclable polyester films. The new material has already been tested at several concentrations by international labs that confirmed that PEF causes no disturbance in the resulting r-PET up to high doses. As soon as PEF is available at an industrial scale, the target is to recycle thin films, PEF films, PET+PEF blended films and/or PET-PEF coextruded films.

This initiative is in line with Terphane’s sustainability platform, which includes the Ecophane line of PET PCR (post-consumer recycled polyester) films that includes rPET and bPET products.