In today’s highly competitive business environment, producing high quality products with increased efficiency are not just catchphrases, they are a necessity. Ever since 1947, Albany Packaging has remained committed to providing the highest quality folding-paperboard products to well-known grocers, restaurants, convenience stores, apparel, and retailers across North America. For more than 70 years, this professional folding carton solutions supplier has specialized in the sheeting, printing, diecutting, windowing, and gluing of paperboard. As business has skyrocketed, its solution to increase capacity was to recently install a new Koenig & Bauer (Booth N2443) Rapida 145 seven-color press along with a Koenig & Bauer AllPro 145 folder/gluer. Since it went live, the new press has provided a 60% increase in press productivity, and has saved the company set-up time, while reducing waste and job turnaround time.

“We believe that our commitment to manufacturing efficiency is the driver behind our continual success,” says Daniel Engelberg, Albany’s sales and project manager. “Being one of the few packaging manufacturers that provides large-format production in Canada, we are fortunate enough to have the capabilities to adapt to ever-changing market trends and meet customer specific requests. Our investments, such as our new Koenig & Bauer Rapida 145 seven-color printing press, Koenig & Bauer AllPro 145 folder/gluer, dual-lane window machines, and tray-former have increased overall plant productivity by 26% this year.” 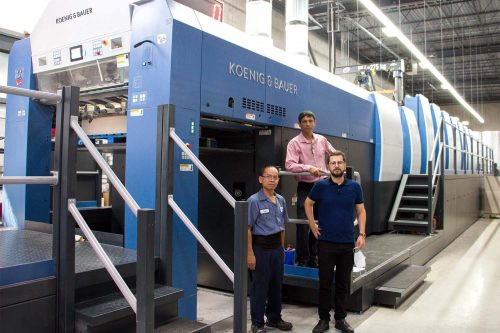 Located outside of Toronto, the 87,000-sqft-facility in Markham, Ontario, totals more than 50 employees. Its customer base, which is situated throughout North America, is comprised of 50% grocery accounts, 40% in the custom print market, 8% in the food service industry (specifically restaurants and bakeries), and 2% in the apparel market.

“We’ve experienced tremendous growth in our custom print division,” says Engelberg. “With decades of experience, we work with our customers to design and build custom boxes for bakery, cupcake, donuts, and other food packaging items like food trays and additional packaging supplies that suit their needs. Having the new Rapida 145 allows us to efficiently produce that work, which calls for shorter run lengths with more creative designs for particular holidays and other special work.”

Armed with the new Koenig & Bauer Rapida 145 large-format press, Albany is utilizing its seven-color units and QualiTronic color control system to deliver the specific logos and branding that its clientele demand. Not only does the new press assist Albany’s clients with high quality, but it strengthens Albany’s reputation in the marketplace as a provider that saves on makeready times and can easily produce consistent color-matched packaging. Albany’s notable customers include national grocers such as Sobeys, Longo’s, and Metro, notable restaurants and convenience stores such as Boston Pizza and 7-Eleven, as well as retailers like Dick’s Sporting Goods.

The Tale of Thomas G. Bright and an Award-Winning Wine Label

Creative Packaging and Excellent Printing Support a Noble Cause