It is with deep sadness that Windmoeller & Hoelscher Corporation announces the passing of the company’s former President, James (Jim) K. Feeney, who died on Saturday, July 3rd at the age of 85 at his summer home in Westport, MA. 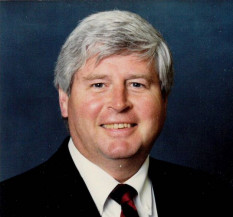 Due to Feeney’s foresight and belief in the potential of W&H in the U.S. market, German management agreed to open a sales and service subsidiary based in Rhode Island in 1977. A strong leader with vision and conviction, Jim was the undisputed choice to become the first president of W&H’s North American operations, where he served at the helm for 24 years. His became the face that customers associated with W&H and he was known as a man of his word. This trustworthiness and integrity became the foundation of the culture he instilled in his team and remains firmly anchored today, twenty years after his retirement.

Jim was an enthusiastic member and respected voice of the packaging industry by customers and competitors alike. He was famous for his talks and considered to be among the most insightful and well-prepared speakers in the industry. He served on the boards of the industry’s major trade associations, including as President of the Flexible Packaging Association (FPA) and as Chairman of the Packaging Machinery Manufacturers Institute (PMMI). In addition, the Flexographic Technical Association (FTA) honored him with the President’s Award in 1999 and later inducted him into the FLEXO Hall of Fame.

Andrew Wheeler, current President of W&H Corporation, stated, “Jim was able to very clearly juxtapose the advanced German machinery with the American way of thinking. He had an incredible appreciation for and understanding of the German management as well as the customer's mindset. He inherently knew that his job was to not only "sell" the North American customers, but also to make sure that our German colleagues were on board as well. He was selling TRUST ... in him, as well as the company.”

Wheeler added, “Jim was the perfect kind of guy to work for; he was affable, stern and straight forward. You knew where you stood with him always. I can’t think of anyone I would have preferred to have learned from and work with.”