Optimizing the recyclability of packaging is one of the most important steps into a more sustainable future. With its EcoLam product line, packaging manufacturer Constantia Flexibles shows that packaging can offer a high barrier and a high recyclability at the same time — an important step towards a circular economy that ensures valuable resources are saved. 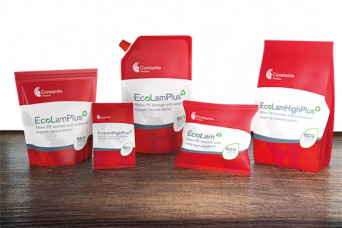 Making packaging materials that are both more sustainable and offer good barrier properties is a challenging yet important task for packaging manufacturers. Constantia Flexibles, an Austrian manufacturer of flexible packaging, is devoting a significant number of resources to this task.

As early as 2019, its EcoLamHighPlus material became the first and only high-barrier laminate to be tested by the RecyClass Initiative of European Plastics Recyclers for its recyclability in the existing LDPE (low density polyethylene) recycling stream. It was successfully proven that polyethylene laminates with high barrier properties, which were previously only achievable with aluminum laminates, can also be recycled.

The packaging company has reached another milestone: an industrial recycling trial of EcoLam laminates. The production waste from different EcoLam family laminates, including EVOH (ethylene-vinyl alcohol copolymer), metallization, adhesives and inks, was shredded and sent for reprocessing. Our partner EREMA successfully reprocessed it into regranulates on an industrial scale extruder. These regranulates were then converted into a new blown film in Constantia Pirk, which was then used in the lamination of new EcoLam materials as a sealant.

Depending on the ink system used, recycled content of up to 80% in the lamination film was achieved – only the sealing layer has to be made from so-called "virgin material" due to its functionality. Constantia Flexibles has demonstrated that printed and metallized PE-based laminates from the EcoLam family can be reprocessed into new films with up to 80% of recycled content, closing the loop for its use in non-food packaging applications.

Further examinations showed that the type of adhesive, as well as the type of printing inks used, have a significant influence on the quality of recyclable material. It is under further investigation whether printed laminates can also be reused in food applications with suitable adhesives and inks. Regranulates from production waste consisting of vacuum metallized films, without adhesives and printing, can even be used in the food contact.

"In a circular economy, it is crucial that recyclable packaging laminates can be reused by the laminate manufacturers themselves, as is already the case for many coextruded films, i.e., films consisting of several materials," comments Prof. Dr. Achim Grefenstein, Senior Vice President of Constantia Flexibles' Research & Development Group. According to Grefenstein, “The current practice of incinerating or downcycling production waste will then be a thing of the past – an important step towards a more sustainable future.”

The New Shape of Label Production