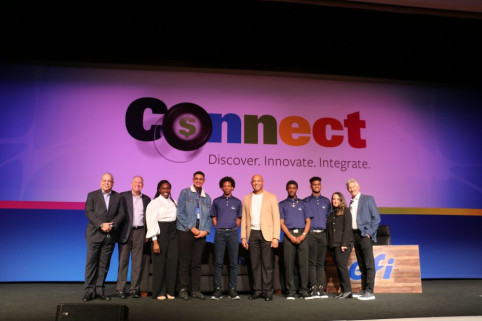 Luis Villa and Larry Weiss, of Atlantic Tomorrow's Office, and EFI CEO Jeff Jacobson, stand with Mariano Rivera and some of the students and instructors involved in the foundation's vocational training program.

The graphic arts industry continues its struggle to attract young people to fill the shoes of a rapidly aging workforce. It’s a serious dilemma impacting printers and suppliers alike — ranging from a lack of skilled production workers inside printing plants, to service technicians with the needed skill sets to repair equipment that a printing operation needs to get up and running. It’s an ongoing problem that’s been even further exacerbated by workers leaving our industry due to changing family needs and a reset of work/life balance priorities brought on by the pandemic and its subsequent nationwide "Great Resignation" movement.

Competing against other manufacturing industries and trade skills professions for new talent, we’re also hamstrung by a general public perception that printing is a dying industry. While those in the printing business know of the endless career opportunities that do exist, that stigma makes industry recruitment a tough hill to climb.

Frankly — unless your family owned a printing company — many veteran print professionals fell into the industry through exposure from a high school shop class, a twist of fate, or by parlaying their experience gained from being hired for a print-related position early on in their careers.

Turning an opportunity into a successful career can also be said of Mariano Rivera, who was a keynote speaker at the 22nd annual EFI Connect user conference in Las Vegas in January. A unanimous first ballot inductee into the National Baseball Hall of Fame, Mariano grew up poor in a fishing village outside Panama City, playing baseball using cardboard gloves and bats made from tree branches. As he matured, his live throwing arm and athletic build caught the attention of the New York Yankees organization, which signed him as an international free agent for just $3,000 in 1990.

During 19 MLB seasons, Rivera posted a record 652 saves, largely by relying on his infamous cut fastball pitch. His career ERA of 2.21 ranks No. 1 among all pitchers who started their careers in the Live Ball era (post-1919), and his 952 games finished also rank him first all-time.

Despite such a successful career, Rivera didn’t lose sight of his humble childhood roots. With his wife Clara, he decided to create the Mariano Rivera Foundation to provide STEM education, job skills and vocational training, mentorship and guidance, and college preparatory services primarily for socioeconomically disadvantaged minority youth. 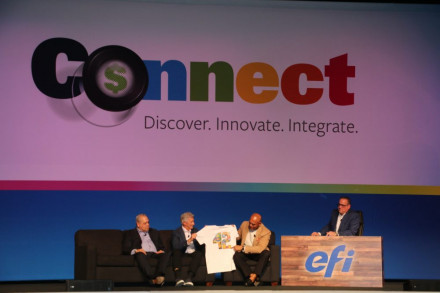 Mariano Rivera describes a shirt he designed with his former jersey number, which features artwork that represents his incredible journey from growing up poor in a Panamanian fishing village to becoming a National Baseball Hall of Fame inductee.

PRINTING United Alliance, NAPCO Media (publisher of Printing Impressions), WhatTheyThink, and the Print and Graphics Scholarship Foundation (PGSF) also gave financial donations to support the foundation and the participation by Rivera and some of the foundation’s instructors and students at the EFI conference.

The graduates coming out of the Mariano Rivera Foundation training program will only make a small dent in filling the need for skilled and committed young workers pursuing careers in the printing industry. But this out-of-the-box kind of vocational program — combined with widespread industry support and involvement — will enable its graduates to enter the graphic arts industry with résumés that include direct industry experience and knowledge.

For Mariano Rivera, every young person who receives a career path and positive guidance through the efforts of his namesake foundation, becomes his 653rd save — and counting. It’s his way of giving back to others the opportunities for success that he has been able to experience in his life journey.

In reality, those young lives being touched are Rivera's greatest saves of all.

Be Sure to Take a #LookAtRicoh at PRINTING United