RMGT, manufacturer of the leading 8-UP offset press in North America, and VISOgraphic will co-host the next stop in the RMGT Commit to Print World Tour on August 10, 2022 in Chicago. The World Tour is being held in major cities across North America with the culminating U.S. tour stop in Las Vegas where RMGT will showcase live press demonstrations during PRINTING United 2022. The final tour stop will take place in Tokyo, Japan, World Headquarters of RMGT and home of the IGAS 2022 show. 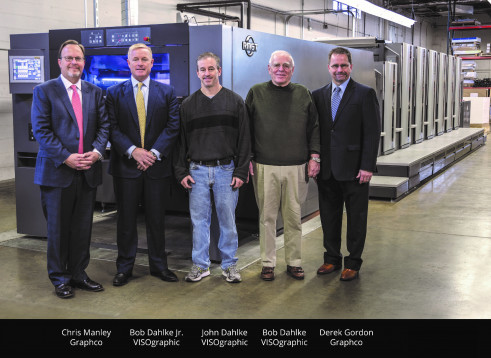 “VISOgraphic is ideally located in Chicagoland, close to O’Hare Airport, providing local and nationwide printers the opportunity to see two extremely productive and reliable RMGT presses in action on one shop floor,” states Chris Manley, President, Graphco, Midwest and Southeast US Distributor for RMGT. Registration for free tickets to the RMGT Commit to Print World Tour can be found at https://bit.ly/CommitToPrint.

“VISOgraphic’s state of the art pressroom is a showplace for RMGT technology featuring both our 9 and 10 Series presses which are equipped with Insta.Color makeready automation, 16,200 SPH production speeds and LED curing technology so this is an ideal location for printers from around the country to learn first-hand what RMGT press ownership has meant for VISOgraphic.” The fast-growing VISOgraphic added their RMGT 9 Series press during the summer of 2020, and it joined the extremely productive RMGT 10 Series press that was installed in 2017.

“Our 10 Series press effectively sold the 9 Series since we have never had a down day since the installation and the 10 has piled up over 100 million impressions.”  states John Dahlke, Chief Operating Officer, VISOgraphic.  The 9 Series fits a unique space between the 40-inch press and conventional digital printing. “The RMGT 9 Series was the perfect next step for our company because we could redirect over 65% of our existing work from the 40-inch press on to the 9 Series at a cheaper cost per sheet.”

VISOgraphic is also transferring more and more of their short run printing from digital back to offset which runs much more economically, at a higher quality level and with greater flexibility on the RMGT 9 Series press.  “The productivity, reliability and durability of the RMGT product has been extremely impressive and we owe a lot of our growth during the past 5 years to the investment we made with Graphco and RMGT,” adds Dahlke.

The culmination of the Commit to Print Tour in the US will be the PRINTING United Show in Las Vegas on October 19-21. “RMGT’s commitment to live press demonstrations during large industry events continues in 2022 with the North American launch of our new 8-UP+ RMGT 970 offset press,” adds Manley. “Our ability to install an 8-up press for a three-day show is testimony to one of the additional benefits of the RMGT 9 Series press: the smallest footprint of an eight-page sheetfed offset press in the industry.” The new RMGT 970 press also features the latest in offset press technology with instant LED-UV curing and greatly reduced makeready. Over 80% of RMGT 9 Series presses running in North America are manned with a single pressman.