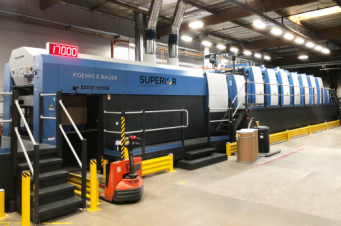 Over the past year, Superior Lithographics, a Los Angeles-based large format printing specialist of litho sheets and top sheets for the corrugated box industry as well as printing and converting folding cartons, has seen impressive improvements in many vital areas including product quality and data on product consistency stemming from state-of-the-art color and quality measuring systems outfitted on its new Koenig & Bauer Rapida 145 seven-color 57-inch press.

“Since our new Koenig & Bauer Rapida 145 57-inch seven color press was installed last summer, we’ve seen incredible improvements within our facility,” says Jeff Ku, Vice President of Operations for Superior. “Our data has shown a 32% increase in overall sheet throughput. We’ve also seen an impressive 25% decrease in make-ready time. All this has resulted in our company experiencing an overall growth in business.”

In addition to obtaining the highest quality print for its customers, Superior Lithographics also has a passion for sustainability that they pursue by utilizing recycled materials, solar panels, and new press technology that has reduced its waste production by 25%.

Catering its folding cartons to a mix of well-known regional retail food vendors, Superior has adapted to the trend toward short orders and a premium on color consistency. An important consideration on the new Rapida is its 100% inspection system, which “can catch errors that an operator can’t catch between press pulls and ensures that all sheets are alike,” explains Ku. Having the new Rapida 145 designed as Superior’s first seven-color press, the firm’s sales force can offer new products and increase its production flexibility.

“Speed, quality, and consistency are our calling cards,” says Ku. “That’s what has propelled our sales to grow by 16% in one year and find ourselves at capacity even with production running 24/7. We’re seeing growth in both of our main sectors; our existing corrugated market remains strong with 60% of our business even as we push further into the folding carton segment, which makes up 40% of our production.”

Efficiency at the Forefront of Package Printers' Investments in Heidelberg Equipment