Across the printing and packaging industries, challenges with recruiting and retaining employees have become a consistent concern. With the aging out of many production employees and a need to bring younger workers into the industry, printers and converters continue to grapple with an issue that is becoming increasingly urgent.

While there are many issues at play that are contributing to a lack of youth in printing and packaging, one of the most pressing challenges for the industry to overcome is a lack of awareness of the opportunities in graphic arts among prospective employees.

“I’m constantly telling people to get involved,” says Pat Klarecki, a professor in the Graphic Media Management department at Ferris State University in Big Rapids, Mich. “Find out where your local graphic arts program is and get involved.”

Part of the reason behind the pressing need for increased recruitment and retention in the printing and packaging industries is that companies are faced with the loss of production staff members at a fairly rapid rate. According to a recent research report from NAPCO Research and  PRINTING United Alliance, “Recruiting and Retaining Workforce Talent in the Package Printing Industry,” package printers and converters stated that on average, they expect 14% of their skilled workers to retire within the next five to 10 years. 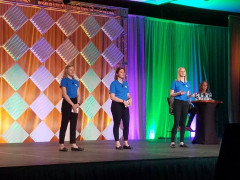 Students from the University of Wisconsin-Stout give a presentation at the 2019 FTA Forum in New Orleans. The students were part of the first-place winning team in the 2019 Phoenix Challenge College Competition.

But by engaging with students at both the high school and college levels, printers and converters can get a head start on drawing potential new employees to their companies. According to Bettylyn Krafft, chairman of The Phoenix Challenge Foundation, a nonprofit organization that promotes flexographic education, the issue is not necessarily that students are avoiding the print and packaging industries, it’s that they are not receiving outreach from the industry.

“You have to get involved in your local schools, and you have to engage,” Krafft says. “You can’t just say [students] are not interested, because people don’t really engage them. You can’t just send them a postcard and expect a response.”

Klarecki says that another important attribute of recruitment is for printers and converters to bring some creativity and flexibility to their job descriptions. For young workers entering the industry, there needs to be a component of education incorporated into their experiences, and developing internships and career programs around prospects’ interests can help keep them engaged in their work and the industry.

“A good manager, or good interviewer, should be able to pick up on areas of skill and desires, and then try to create an experience to fit with what that student wants, and what the company wants to teach them,” he says.

For those younger employees who are engaged with their work and with the industry, Klarecki recommends that companies cater to their strengths. This allows for a positive growth experience, and will reinforce their employment with additional professional benefits.

“Companies need to take a look at what [young employees] are strong in, what they want to do, and then build a job description around that,” he says. “We’ve got these young people investing time and energy thinking about a career [in the packaging industry], so what can we send them home with that’s going to be a positive experience?”

Development of internships and other learning opportunities is an area for improvement within the packaging industry, according to the results of the NAPCO Research and PRINTING United Alliance study. For instance, just 16% of respondents stated they offer an internship program. Meanwhile, 16% also indicated they conduct college recruiting, while 9% say they recruit at the high school level.

Krafft recommends that printers seek out opportunities to participate in high school career days, a strategy she says is underutilized in the industry.

“Get with the guidance counselors, engage them, and do a tabletop there at the facility,” Krafft says. “I did probably 20 different career days last year and I can say the response was overwhelming.”

Creating a Culture of Engagement and Reinforcement

Whether a student enters the workforce straight from high school or after some degree of secondary education, the transition from school to full-time employment can be a challenge for some. One strategy to help boost employee retention, Krafft says, is by developing a culture that encourages more than just feedback, but a demonstration of investment in an employee via one-on-one communication.

“I don’t think it’s just feedback,” she says. “They need more one-on-one. That’s what they’re starving for. They go through school, take tests, and get grades. The worst culture shock that a high schooler or a college student has the first few months out of school is where you don’t have that immediate feedback.” 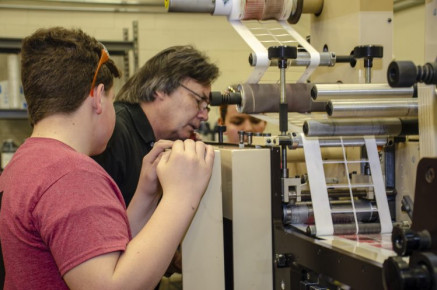 Klarecki explains that young people entering the workforce have the drive to succeed at their new companies, but says it’s imperative that they understand the impact of their contributions. Beyond just positive reinforcement of a job well done, he says that showing new employees how they are having a positive effect on a company, and consequently, their own futures, can help drum up that excitement for them to remain plugged in.

“Young people have not only the desire, but the need to feel like they are contributing,” Klarecki says. “They need to be sure they’re adding value to what they’re doing. The younger generation is not willing to invest time in doing a good job without positive reinforcement and a vision of where that success will lead them.”