StickerGiant: The Benefits of Focus 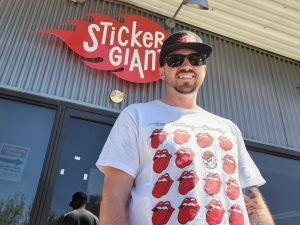 As a business, StickerGiant has a lot going for it, and one of the biggest things is its focus. As one of the more prominent sticker and label producers in the United States, the Longmont, Colorado-based company is focused on a space that bridges the divide between B2B and B2C accounts. “Our goal is to make it easy to order,” says Jesse Freitas, StickerGiant’s Senior Director of Marketing, “and to make the product accessible.” A quick trip to the company’s website provides a refreshing view on ordering – it’s straight-forward, easy to understand, not rife with too many choices. Freitas says the company’s commitment to making things easy extends to features such as free artwork setup and low minimum orders. Another way the company makes it easy for its customers is to provide access to a “real person” when needed. 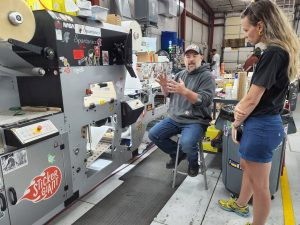 An additional area of focus for StickerGiant is in its approach to production. All the work the company does is one of 11 possible product variations, 7 of which ship to the customer next day. This means the company has a streamlined approach to printing on its HP Indigo presses; finishing either through die, kiss, or laser cutting; or in its choice of base stock and laminates. Because of this simplified approach, there is little if any press down-time between jobs – meaning production flows and turn times are short. Freitas says the company averages between 350 to 450 jobs each day. The company’s “sweet spot” for run lengths is 125-3,000 pieces, he says 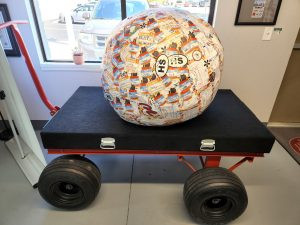 StickerGiant’s “Saul the Sticker Ball,” likely weighs in at around 600 pounds.

Located in an industrial area just a mile from Longmont’s downtown, StickerGiant occupies two buildings, which are located across the street from each other. One of the buildings, which previously housed only offices, is now being used for production – a positive result of the company’s continued growth. Decorated with – of course – lots of stickers and artwork that shares the personalities and priorities of the company and its employees, the company presents a “vibe” that is young, informal, and friendly. The company’s attention to its culture is apparent, and its light-hearted spirit is illustrated by “Saul the Sticker Ball,” the Guinness-verified world’s largest sticker ball.

An interesting question: Is StickerGiant a package printing company, providing short-run labels and stickers for craft beer and other beverage producers, the cannabis and CBD industry, and manufacturers of other products, food or otherwise? Or is the company a promotional products company, enabling the producers listed above and many others to share their brands on American’s car bumpers, water bottles, skateboards, and myriad other surfaces? Freitas says he can see the company as both, but considers it as being more a producer of promotional products, building brands and identities. 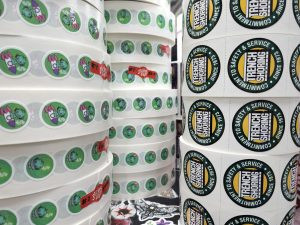 Looking forward, Freitas says expected growth may find the company expanding out of its current location in order to gain additional production space. One production goal for the company is to profitably produce even shorter runs, allowing for more specialized use. One micro-run example he shares is for custom wine labels for a wedding reception, requiring a very limited run. Asked whether StickerGiant will expand its reach into areas such as digital embellishment or holographic label production, Freitas says the company will stay its current course, continuing to focus on its core products.