MPS officially has a new home in North America, and to celebrate, the company hosted an open house event, which began Wednesday, Jan. 22, and continues through today. Approximately 125 people visited the new facility in Levittown, Pa., on the first day of the event and with the theme of “Labels Connected,” were provided a full-day agenda featuring product demonstrations, customer testimonials, and updates from key executives representing MPS and its partners.

The move to Levittown, located about 20 miles northeast of Philadelphia, provides a more geographically convenient location than MPS’s prior North American location in Green Bay, Wis., the company, which is based in the Netherlands, stated in its initial announcement. Additionally, the move allows MPS to share a facility with ImageWorx, a label and packaging prepress specialist and MPS partner.

To open the event, MPS CEO Atze Bosma discussed some of the company’s key objectives for 2020 and beyond. Standing in front of the EF SYMJET, a hybrid press featuring flexographic components from MPS and an inkjet unit supplied by Domino, Bosma said that the direction the label industry is heading in will continue to dictate a need for flexographic and digital print. But with the added complexity that industry trends like short runs and increased efficiency demands are bringing to converters, maintaining a successful operation extends further than just the press. 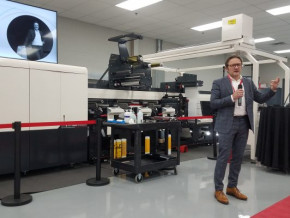 Bosma introduced MPS’s “Beyond the Machine,” platform, which he said consists of four pillars — applications, productivity, connectivity, and service. With these objectives in mind, Bosma said converters will benefit from being able to produce high-end applications at high speeds, while maintaining communication throughout the production process and maximizing equipment uptime.

“You need a very strong machine that is operator focused and focused on productivity, but also connected to the world,” he said.

Further defining the event’s theme of “Labels Connected,” Michael Weyermann, MPS’s VP of sales and marketing, explained that part of what drives MPS’s innovation is its desire to build on the technologies that have made it successful in the past and enhancing them for the future of the industry. And part of the philosophy in achieving that goal is to focus on the needs of today’s press operators while delivering high-quality, repeatable results.

Shedding light on the steps MPS has taken to deliver on this goal, Weyermann outlined multiple technological advances the company has incorporated into its equipment. In addition to job save functionality — designed to provide significant time savings during the makeready process — Weyermann highlighted MPS’s slide out ink drawers, which provide operators with a clean hand changeover.

As far as the print quality operators can expect from MPS equipment, Weyermann specifically highlighted the company’s Crisp.Dot technology. This technology relies on a non-driven impression roll, which Weyermann explained reduces friction and adds stability in the printing process. As a result, he said multiple substrates can be run on press with a significant reduction in dot gain.

“If you look through loupes, you’ll see the dot structures are perfect,” he said. “There’s no elongation of dots. This helps print true dots.” 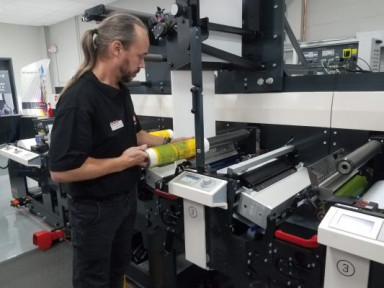 In addition to hearing from MPS executives, attendees were also able to gain insights from a user of MPS equipment. Tara Halpin, owner and CEO of Newport, Ky.-based label printing company Steinhauser, made the trip to Pennsylvania to share her experience of purchasing, installing, and integrating an MPS EF 530 flexo press. Halpin shared that when seeking out a new press, the key features she wanted included a 20˝ width, servo-driven platform that could run multiple substrates and provide a variety of embellishments.

At first, Halpin said Steinhauser was considering equipment from seven different press manufacturers, but after visiting the MPS facility in Green Bay to run live trials of three select Steinhauser jobs, she was convinced that the company had found its new press.

“MPS just nailed it,” she said. “They printed it as we did so we could compare what we were doing on our ten-color Comco. We could see what the future looked like and it was beautiful. It gave us the peace of mind that what we saw on press we would be able to repeat.”

Beyond the impressive print results, Halpin said the press’s ease of use has made for a smooth integration process. She said Steinhauser has four operators trained on the press, ranging from an experienced flexographic “craftsman” to an HP Indigo digital press operator who transitioned into a flexo role.

As MPS seeks to add to its roster of success stories, Bosma said that the goal of increased connectivity between MPS, its partners, and its customers will be at the core of the company’s mission moving forward. And as a result, he said the industry as a whole will benefit.

“In my view this is a leap for the industry if we do this job,” Bosma said. “We can’t do this alone. This has to be done together with you.”

Wegmann Details its Successes with CEI BossJet Powered by Domino