It is a long way from Rehovot, Israel, to Rochester, N.Y., and it has been a long time since companies like Rochester’s Mercury Print Productions first began hearing about a new type of press platform based on a breakthrough inkjet process called “Nanography.” 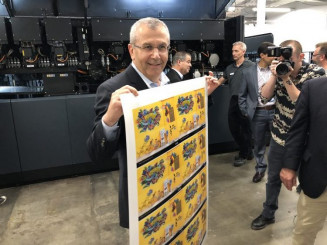 Mercury Print Productions has closed the gaps of time and space by becoming the first U.S. print service provider to install a press manufactured by Landa Digital Printing, the Israeli company that introduced Nanographic presses in prototype at drupa 2012.

For Mercury Print Productions, the Landa S10P Nanographic Printing Press it has been beta-testing over the last four months represents a new way to serve customers in the educational and commercial markets with high-quality, on-demand digital printing. It may even open a path to additional profit in short-run packaging, according to John Place, CEO.

For Landa, the installation certifies the successful commercial arrival of a product that has finally dispelled what Nachum Korman, the company’s Vice President and General Manager for the Americas, admitted were “suspicions” about its exceptionally slow rollout and the viability of the technology behind it. 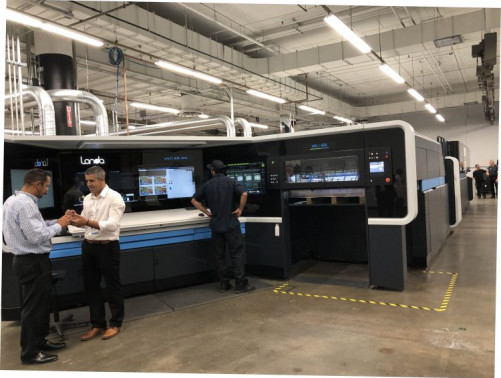 Mercury Print Productions of Rochester, N.Y., showed off its Landa S10P Nanographic Printing Press to visiting journalists and analysts on June 27. The Landa S10P now in beta testing there is the first placement of a Landa Nanographic press in the U.S.

No such misgivings were heard at Mercury Print Productions on June 27 when a group of journalists and analysts visited the plant at Landa’s invitation to see the S10P in action.

“This press is going to change the way we do business,” said Place of the B1-format, 6,500 sph sheetfed perfector. He called its print quality “spectacular” and said he could foresee installing a second S10P as demand for its output grows.

Gilad Tzori, Landa’s Vice President of Product Strategy, said the manufacturer “really is privileged to have such a beta” as Mercury Print Productions, which has a long track record as a proving ground for digital press equipment.

From the beginning, Landa has positioned Nanography as the process delivering the lowest printing cost per sheet. Some of the savings, Tzori explained, come from the elimination of prepress steps and the compatibility of the B1-format size with existing postpress equipment at many commercial plants.

Felix Medero, Director of Process Development at Mercury Print Productions, affirmed that the company has reaped these benefits in putting the S10P to work. The first job runs on it, he said, took 11 hours less time to produce than it would have needed on the plant’s toner presses. Faster postpress processing, easy press restarts for reruns, and the device’s variable printing capability add up to “a huge success story” for the S10P so far, Medero said.

John Place (right), CEO of Mercury Print Productions, says the company’s Landa S10P “is going to change the way we do business.” With him are Felix Medero (left), Director of Process Development, and Christian Lopez, S10P press operator.

Place said that the variable output, 29.5x41.3˝ maximum sheet size, and minimal dot gain of the S10P are among its strongest assets. The press was installed primarily to print ancillary work for the educational market, a business that accounts for the largest share of the company’s volume.

A real plus here, Medero pointed out, is the S10P’s ability to print fully collated, variable pages for book blocks, a step that saves considerable time in post-print cutting and binding.

Place also expects to use the press for commercial jobs and print-on-demand applications. He said that the S10P, installed toward the end of last year, has produced about 1.5 million sellable sheets in its trial runs to date.

Place believes that packaging offers another opportunity, given that the S10P can handle media up to 24-pt. thick. “We are going to go after the packaging world” with the help of the S10P, he said, noting that the company has clients that “can’t wait” to run small-quantity box work on the press.

Expansion into adjacent areas of opportunity is a keynote of the history of Mercury Print Productions, started in a basement by Place’s mother, Valerie Mannix, in 1968. Pace joined the company, straight out of high school, in 1979.

Hard work made the business thrive. But, during the industrywide slump in the aftermath of the 9-11 attacks in 2001 – a downturn that wiped out almost half the company’s sales overnight – the family realized that commercial print alone wouldn’t be enough to sustain things going forward.

That prompted the move into the educational market, for which Mercury Print Productions produces short- and long-run books as well as ancillary items such as covers, tabs, and flashcards. Place says that the company, which has no sales force on the educational side, maintains relationships with segment-leading publishers like McGraw-Hill, Pearson, and Harcourt by virtue of “spectacular customer service.”

The educational operation grew to a point where it needed a separate, 80,000-sq.-ft. facility to house it. Meanwhile, the company was investing heavily in digital printing. “At one point,” Place recalled, “we had 30 iGens on the floor.”

It also was establishing a reputation as a preferred site for digital print beta testing, with Indigo – founded by Benny Landa, the same inventor, and entrepreneur behind Nanographic printing – as one of its partners.

The company also launched a venture for on-demand photo books and, in 2014, consolidated all of its operations in a 180,000-sq.-ft. plant in Rochester Tech Park. Currently, Mercury Print Productions employs 230 people and has reached $54 million in annual sales.

This high-output environment is part of an expanding constellation of sites where Landa Nanographic presses are or soon will be in place, said Landa’s Nachum Korman during the media and analyst briefing. 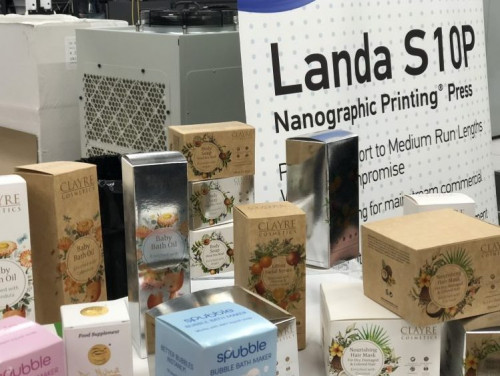 The Landa S10P at Mercury Print Productions can handle stock up to 24 pt., making it suitable for short runs of packaging as well as commercial and publication work.

Driving acceptance, according to Korman, is the mainstream print market’s desire for a digital press that is compatible with 40˝ production; able to print economically in larger quantities as well as short runs; and capable of printing on the most widely used stocks. Nanographic printing “solves all those problems,” he said.

The process jets billions of droplets containing nanoparticles – almost vanishingly small bits – of pigment onto a heated offset blanket that evaporates most of the water from the image. The blanket then transfers the image, made of round, sharp dots in a film of ink just half a micron thick, to the substrate.

Besides the commercial-print oriented S10P, the Landa Nanographic Printing Press line includes the S10 sheetfed press for folding cartons, POP/POS, and corrugated boxes; and the W10 web press for short-run flexible packaging. Still in development is the W10P, a twin-engine web press for magazines, journals, catalogs, and direct mail. All are B1-format devices with 41” sheet lengths or web widths.

Landa is bringing the equipment to market with what Korman described as a total commitment to global service and support.

Operator training, for example, begins with 12 online sessions on Nanographic press theory. The operator then travels to Landa headquarters in Israel for hands-on instruction and goes home with a Landa engineer who remains on site for one to three weeks to get production on the new press fully up to speed.

“We will not leave the operator not knowing what to do,” Korman said.

He added that Landa has chosen United Parcel Service of America, Inc. (UPS) as its third-party logistics provider. In this arrangement, Landa will ship parts and supplies to a UPS freight hub in Lexington, Ky., from where the materials can be redistributed to UPS depots closer to customers.

The S10P at Mercury Print Productions showed all signs of having been installed and supported with meticulous care.

Benny Ohayon, a Landa Customer Experience Center Manager on hand for the media visit, pointed out features that suit the press to its tasks. These include integrated IR drying and UV curing; a heavy-duty, B1 sheet feeder; and an Active Quality Management (AQM) system that automatically checks registration and nozzle conditions, scans for artifacts and other print defects, and validates barcodes and QR codes.

Everything during a 6,500 sph simplex or a 3,250 sph duplex run on the 4/4 press is controlled from the “cockpit”: a wrap-around control console with vivid graphical displays at the delivery. The press also has a smaller control station at the feeder for use in troubleshooting.

Landa’s Gilad Tzori said the installation of the S10P at Mercury Print Productions has added momentum to the manufacturer’s efforts to establish Nanography as the process that will speed up the industry’s migration from traditional production to digital output.

What Place and his team have accomplished with the press makes clear that “the value proposition of our press is really proving itself,” Tzori said.

The Advantages of UV Inkjet

SCREEN Ramps up Service, Parts, and Consumables Systems Amidst Pandemic

Tom Dupont on how acpo is Keeping Customers and Employees Up and Running
END_OF_DOCUMENT_TOKEN_TO_BE_REPLACED
Jobs
Garland, TX