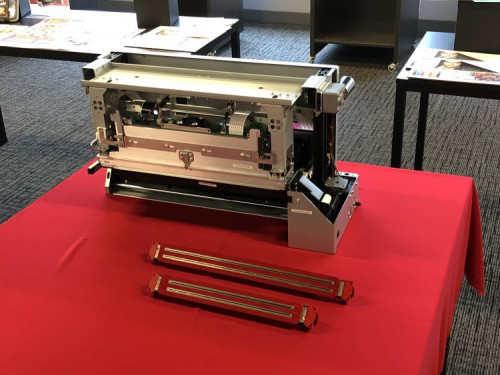 As an OEM to OEMs, Memjet advances the capabilities of inkjet printing under the hoods of inkjet equipment in which its products are the key components. No inkjet press carries the Memjet brand, but increasing numbers of them use its printheads and related technologies as their core imaging systems. With the arrival of the third generation of Memjet’s integrated solutions for inkjet OEMs, the numbers could grow larger still.

The new product is called DuraFlex, and Memjet previewed it for a small group of journalists and analysts at the company’s San Diego headquarters a week before its official launch on Sept. 3.

Designed primarily for use in benchtop and entry-level label and packaging presses, DuraFlex fills an implementation gap between VersaPass, Memjet’s first-generation inkjet print engine for desktop, wide-format, and press applications; and DuraLink, aimed at inkjet presses for full-scale commercial print and packaging production.

All three feature high-resolution (1,600 x 1,600 dpi) Memjet thermal drop-on-demand printheads that can be “stitched” end to end in a variety of printing widths. In DuraFlex’s case, these will be A4 and A3+ configurations up to 50˝ (1.2 meters) across, enabling office and industrial print OEMs to build benchtop, light production, and entry-level presses around them.

Print speed from DuraFlex’s single-pass, four-color printhead is up to 150´ (46 meters) per minute. (See sidebar below for additional details.) Partners can use its embedded RIP datapath or run their DuraFlex-enabled devices from external RIP digital front ends.

With its full nozzle redundancy, its streak-free imaging, and its aqueous pigmented inks, DuraFlex is “the most offset-like of any of the digital technologies,” said Kim Beswick, general manager of Memjet’s benchtop and mini-press division. The fact that its non-UV inks are safe for indirect food contact makes labels and packaging “a greenfield opportunity” for the technology, she added.

In her presentation, Beswick indicated that DuraFlex will print on a wide range of media including porous, uncoated offset, inkjet treated, and inkjet coated. For packaging, the eligible stocks are folding carton and corrugated, with additional capability for coated films and flexible packaging. A white paper from Memjet states that over 40 media from more than 10 manufacturers have been tested for compatibility with DuraFlex.

The forms that DuraFlex systems take and the hardware prices they command will be up to the Memjet partners that surround the technology with the rest of the components needed to build an inkjet press.

At the whiteboard, Memjet’s Kim Beswick briefs journalists and analysts on DuraFlex, the company’s third-generation printhead technology for developers of inkjet printing systems.

Memjet supplies the DuraFlex printheads; integrated modules for print management, ink delivery, and waste ink management; as well as ink and ink tanks. OEMs are expected to contribute a paper path, housing for the print engine, electronics and user interface software, and other machine essentials.

The idea is to give OEMs a fast, reduced-cost method of bringing new inkjet equipment to market. Memjet believes that the design-friendly modularity of its technology will encourage more of them to invest in developing high-performance benchtop systems and entry-level presses with DuraFlex.

Memjet expects full commercial launch for DuraFlex by drupa 2020. At the press-analyst briefing, the company introduced two OEMs as initial adopters: Kirk-Rudy, which will incorporate DuraFlex into its Firejet 4c color inkjet system; and Colordyne Technologies, which will make DuraFlex the basis of a new print engine for its 2600 Series and 2800 Series label printers as well as in solutions for its strategic partners.

Bob Mills, general manager of Kirk-Rudy, described the Firejet 4c as a 12.75˝ wide, 90-150 fpm, prototype device supported by software for color management and variable graphics, barcodes, and data. He said applications include direct mail and envelopes; sheet printing; packaging including diecut boxes and corrugated; and specialty items such as napkins, coasters, and bags.

Memjet’s “industry leading technology” and its engineering, service, and marketing support are what encouraged Kirk-Rudy to enter the partnership, according to Mills.

Colordyne CEO Gary Falconbridge declared his company to be the source of “the widest offering of Memjet-powered printing solutions in the industry,” with about 570 systems installed. He said Colordyne sees DuraFlex as a way to fill a gap in short- and medium-run inkjet production both for its own equipment and for the devices it develops with integration partners.

OEM affinity has always been a business leitmotif for Memjet, which delivered its first VersaPass systems in 2009 and was an R&D pioneer in printheads, inks, data paths, and modules in years prior to that. Today the company works with more than 30 OEM partners and has delivered, according to CEO Len Lauer, 12,000 systems spanning 52 different products in eight market segments.

With the George Kaiser Foundation as its principal financier, Memjet employs 350 people in San Diego, Boise, Dublin, Sydney, Taipei, and Singapore. The company holds 2,700 patents for its technologies and currently is developing 100 new products per year, Lauer said.

The Head of the Class; the Class of the Head

Printheads are stitchable to 50˝ across.