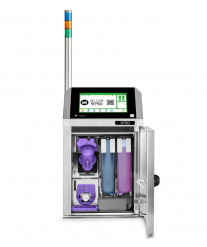 Markem-Imaje, the global provider of end-to-end supply chain solutions and industrial marking and coding systems has announced the global launch of the 9750 continuous inkjet printer.

As inkjet printing celebrates its fortieth anniversary, the 9750 builds on Markem-Imaje’s four decades of excellence in continuous inkjet printers and ushers in the next generation of printers capable of powerful traceability coding including text messages up to five lines, logos, and high resolution 1D and 2D codes, on a vast array of packaging.

Featuring advanced R&D supported by proven industrial processes and methods, the 9750 has been engineered on the basis of Markem-Imaje’s Intelli’Design concept. It is designed to maximize uptime and maintain the highest performance levels in even the most demanding environments and with the highest throughput levels. Markem-Imaje’s engineers and design teams developed the 9750 to provide optimized Total Cost of Ownership (TCO) and overall equipment effectiveness (OEE), while contributing to customer’s sustainability objectives.

With sustainability at its heart, the 9750’s Intelli’Design process and a portfolio of rigorously developed ink formulations, including alcohol-based, water-based and MEK-free inks in a wide variety of colors, help reduce consumable consumption and Volatile Organic Compound (VOC) emissions by up to 50%, while improving operator safety and well-being.

The 9750’s Intelli’Swap modular system means that customers can swap out individual parts that need to be replaced and not the entire block, reducing both waste and cost. Its unrivalled consumable-saving mode option further reduces consumption and waste by up to 60%.

A modern, smartphone-style 10-inch user interface makes the 9750 one of the simplest printers to use on the market. In addition to its full stainless steel-made IP56 robustness, it is Industry 4.0-ready, making it easy to integrate into any production line.

“Markem-Imaje has earned its reputation as a true innovator in continuous inkjet printing” said Rémy Fontanet, product marketing manager, Markem-Imaje. The 9750 represents yet another step forward in inkjet technology. It’s a thoroughly-modern printer grounded in four decades of innovation and underpinned by the most stringent manufacturing standards.

No matter where you are in your technological adoption or how demanding your requirements, the 9750 will secure your investment by delivering outstanding performance and ease of use while supporting the delivery of sustainability commitments.”

Current customers who have tested it, praised the new inkjet printer. Jérôme Vaglienti, maintenance manager at SOFIC, one of the leading surgical and medical supply manufacturers, says the 9750: “Provides the codes we needed on very small spaces. It is extremely easy to use thanks to its new highly responsive user interface. The extended service intervals have become minimal which results in more uptime.”

The 9750’s full-featured Packaging Intelligence Suite™ software capacity allows for accurate, smart and optimized message design and data management across the factory from a remote location. This ensures greater accuracy and efficiency.