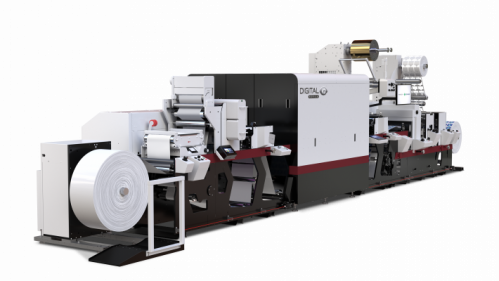 Hybrid platforms combining flexographic and inkjet printing technologies have been gaining adoption throughout the label and package printing industries, and with the announcement of the company’s latest offering, Mark Andy CEO PJ Desai says that barriers have been broken to produce a more accessible hybrid press geared toward boosting profits.

In an online launch event held Wednesday, Feb. 17, representatives from Mark Andy and Domino led a deep dive into the Mark Andy Digital Series iQ, the latest hybrid press on the market, built on the Mark Andy Evolution Series platform, and driven by a Domino N610i digital inkjet engine. The press, which joins the Mark Andy digital portfolio alongside the Digital Pro and Digital Series HD, offers a highly customizable platform, allowing a cost-effective solution for converters interested in hybrid.

“We realized that many of our customers did not have a large book of business to justify the purchase of a high-speed Digital Series HD press, but they still wanted an economically justified hybrid inkjet solution with the latest technology,” Desai said. “We decided that the quickest and the best solution for our customers would be if we joined hands with a leading technology provider like Domino to develop a joint solution for our customers. Fortunately for us, Domino also had a similar strategy, and we’re able to offer you the new Digital Series iQ press.”

In fact, converters had been expressing a desire for Mark Andy and Domino to partner on a new solution for some time, said David Ellen, global digital director for Domino’s digital printing business, adding that a common recurring question he faced was why Domino had not yet joined forces with Mark Andy on a hybrid press. And while the Digital Series iQ is the first launch under this new partnership, Ellen forecasted that it would not be the last.

Following the introduction of the new press and the partnership between the two companies, representatives from Mark Andy and Domino detailed the specific attributes of the Digital Series iQ and the advantages it brings to the label and package printing segment. Jerry Henson, sales manager for Mark Andy, explained that the advantages of the press can be placed into four categories — performance, modularity, range, and affordability.

Regarding performance, Henson said the press can operate at rapid speeds, ranging from 165 fpm in high quality mode, to 230 fpm in high speed mode. Modularity, he explained, is one of the press’s top differentiators, as it can be configured in a variety of arrangements. Every option available on the Evolution Series presses can be applied to the Digital Series iQ, including cold foil, rotary screen, lamination, and numerous other options. The press also features the VDC-SR diecutting system, offering full and semi-rotary diecutting capabilities.

Range meanwhile, refers to the press’s versatility in substrates and applications, Henson said, detailing how the Digital Series iQ can print on all the key materials in high demand for hybrid production, including pressure-sensitive paper, films, unsupported films, and paper stock. And from a cost perspective, Henson explained that the press starts at an affordable initial price, and due to its modularity, can be configured within a converter’s cost parameters.

Additionally, he said that the Digital Series iQ is available in up to seven colors, and can be configured with as many flexo stations before and after the digital unit that the converter requires. Most commonly however, he said that four flexo stations are implemented in the press, though as many as eight are feasible.

For a look under the hood of the Domino N610i digital unit, Mike Barry, key account and OEM manager for Domino, offered some insights into the advantages of Domino’s inkjet technology. He explained how the N610i unit features multiple rail systems for the white and color inkjet bars. This is beneficial, Barry explained, because it allows the white print bars to stay capped and out of the way while the color inkjet bars are printing. Additionally, he added that the curved arc of the print zone provides the proper tension needed during printing.

But when it comes to the Domino technology specifically, Barry explained that the company’s i-Tech features are what sets it apart and provides a variety of advantages to users of the technology. During the event, Barry highlighted three i-Tech features specifically — ActiFlow, StitchLink, and CleanCap.

Barry explained that ActiFlow provides an ink recirculation process that ensures the nozzles are at the ready when needed, by keeping the ink circulating within the printhead, even when it is not printing. StitchLink meanwhile, is an automated printhead stitching process, which combines software and micromotors to ensure a high quality image across the web, and is faster than manual stitching processes. CleanCap, Barry explained, is an automatic printhead cleaning feature, which provides a nozzle flush, ink purging, and wiping in under one minute.

“This CleanCap system is crucial for the automation and the uptime of the system,” he said. “It allows operators to focus more on printing than on cleaning.”

He added that when installing the new press, Mark Andy’s training program will help converters get up to speed on the hybrid platform so it can get into production as soon as possible.

“Mark Andy will provide training on the tools mentioned above to ensure the learning curve is minimized and you’re producing the quality level you expect in the shortest time possible,” he said.

Wegmann Details its Successes with CEI BossJet Powered by Domino