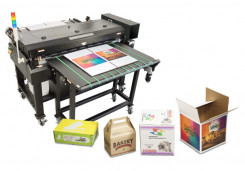 Xanté announced that Landmark Packaging, a national supplier of custom cartons and packaging supplies, has installed two new Excelagraphix 4800 digital package printers at its new facility in Aurora, Colo. The two printers, combined with Landmark's existing Excelagraphix 4200 printer, will provide the company with significantly more production capacity in order to keep up with its expanding business. “Speed is everything,” said Paul Landwehr, vice president and one of the founders of Landmark Packaging, “and with the Excelagraphix printers we expect to be able to keep up with the increased demand we're experiencing.”

In business since 2012, Landmark Packaging has made its reputation on flexibility to respond to requests from small and medium-sized businesses across the country. The need for custom packaging from this niche requires Landmark to efficiently produce shorter runs than typical carton suppliers. “A run of 1,000 or even 5,000 cartons is below minimum for large integrators,” said Landwehr. “That's where being a wholly digital facility allows us to satisfy our customers.”

The Xanté Excelagraphix 4800 digital packaging printer, running at up to 12 inches per second, is the ideal solution for short-run variable data carton printing. Whether the substrate is folded-and-glued or flat sheets of corrugated, Excelagraphix turns out full-color, fully-customized results at speeds of up to 416 24'' long sheets per hour. “A typical run rate for our Excelagraphix is about 3,000 to 5,000 cartons per day,” said Landwehr. Powered by Xanté's own iQueue Adobe PostScript PDF workflow software, incorporating serialized lot numbers, unit numbers, and even barcodes on individual cartons without impacting speed is simple. “The Excelagraphix provides an alternative to flexo printing and the success that Landmark has experienced with it is a testimony to its capability,” said Mark Swanzy, COO of Xanté.

The new Excelagraphix 4800 printers will complement new box-making machinery that Landmark is also adding. “This last month has been crazy to say the least,” said Landwehr. Experiencing its busiest month, the company has continued to supply its many customers with much-needed packaging while moving its operations into a new 68,000-sq.-ft. facility. “We work with many food producers and, since they are essential businesses, they haven't slowed down,” said Landwehr. “While no one knows what's going to happen in the near-term, we're only anticipating continued growth at Landmark.”