IST UV Days has earned a place in the same category with Dscoop and Hunkeler Innovationdays as a vendor-supported, international symposium that’s about more than simply promoting the host’s product line.

With the blessing of HP, the Dscoop user group programs address digital printing technologies and applications. Named for the company that organizes it, the Hunkeler event covers similar ground. Since 2002, IST Metz GmbH has built its conference agenda around a more narrowly focused but no less significant aspect of graphic production: UV curing technologies for inks and coatings.

Like Dscoop and Hunkeler Innovationdays, IST UV Days does it with the help of partnering vendors for an invited audience of end users. The eighth edition of the biennial event took place from May 15 to May 18 at IST Metz’s R&D and manufacturing headquarters in Nürtingen, Germany, where the company was founded 40 years ago. About 1,000 printers and others from 35 countries attended over the four days of the program, making this year’s edition the largest in the series to date.

As the world’s largest supplier of UV systems and equipment for printing, IST Metz knows its way around the subject matter. The company, a consortium of 14 different businesses that develop and sell UV solutions, derives about three-quarters of its revenue from UV for printing.

IST Metz distributes in-line UV curing units and related systems under its own brand and OEMs them to press manufacturers such as Heidelberg, which install them on new presses or furnish them as retrofits. The company’s largest single market is the U.S., where its IST America division has been in operation for 25 years.

“Energy in light,” the theme of this year’s UV Days event, is also the newly adopted slogan of IST Metz, which initially ventured into UV with curable varnishes for furniture. The program aimed to acquaint visitors with the ways in which UV curing is becoming easier to work with and broader in its range of value-adding applications for commercial, label and package printing.

Technical demonstrations in live press runs presented new solutions for sheetfed and narrow-web production. Tours of the company’s factory and lab areas along with tabletop exhibits by more than 40 vendors kept the spotlight on innovation and opportunity in the UV space. A parallel program called UV Forum offered an overview of developments in UV for industrial applications such as bonding, repairing and curing fiber composites.

One of the main objectives on the printing side was to clarify misunderstandings about the respective pros and cons of UV curing with conventional lamps and systems that use frequency-tuned light emitting diodes (LEDs) as the radiation source.

IST Metz, which manufactures both types, sees parsing the technical differences as less important than helping customers choose the right method for the curing tasks they have to perform. The company even has a free “buy one, try one” offer for a solution that makes it simple to switch from one process to the other in evaluation runs on press.

The basic distinction between them comes from the position that each occupies in the electromagnetic spectrum, where UV (ultraviolet) radiation falls between visible light and X-rays. The UV wavelengths of interest to printing are UV-C, UV-B, and UV-A, which differ by the depths to which they can cure.

When UV wavelengths strike compounds known as photoinitiators in UV-activated inks and coatings, the fluids dry and harden almost instantly. This process, called polymerization, takes place within one range of wavelengths for conventional UV lamps and within another for LED UV arrays. This means that inks and coatings have to be formulated differently for each set of wavelengths, creating two types of solutions and leading to two different classes of consumable products.

Lamp-based UV is a long established, widely used process supported by a broad selection of inks and coatings for color and special effects. Its perceived drawbacks have mostly to do with the nature of the lamps, which contain mercury, generate heat and ozone, and consume large amounts of power.

Compact LED arrays cure rapidly at lower power with no worries about mercury or ozone. The arrays last a long time and are easier to retrofit than lamp-based systems. As the newer of the two processes, however, LED UV does not have as many inks and coatings to work with as conventional UV, and the fluids with which it is compatible are more expensive. 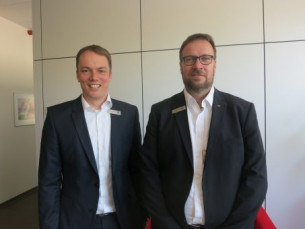 But at the end of the day, said Christian-Marius Metz, CEO of IST Metz, the so-called “race” between lamps and LEDs doesn’t matter. What’s important is understanding which process works best for the curing task at hand.

He described LED UV’s debut for printing at drupa 2008 as the start of a “hype cycle” in which expectations were high and facts gained from experience were few. We know now, for example, that although LED UV has a long list of plusses to recommend it, it can be a challenging process that doesn’t forgive mistakes and needs flawless ink chemistry to make it work.

Meanwhile, said Holger Kühn, managing director, sales, the strides that conventional UV has been making show why a clear majority of IST Metz customers continue to prefer lamps to LEDs in their UV curing systems. Lamp life in particular has come a long way, with some lamps lasting as long as 15,000 hours. Conventional vs. LED UV operating cost comparisons that don’t properly account for lamp longevity can be misleading, Kühn noted.

LED UV is, nevertheless, where a large part of IST Metz's future growth will come from. Data presented by Metz and Kühn indicated that by 2021, the UV market will be about evenly divided between conventional and LED systems, with LED UV having pulled several percentage points ahead. Metz said that about one-third of the company’s current sales are LED UV installations.

Advances in LED UV technology are expected to drive greater demand for UV curing in packaging, where the process is already heavily used. Metz noted that although direct contact between UV-cured surfaces and food is ruled out by protocols such as the Swiss Ordinance for food packaging safety, there are plenty of success stories for UV food packaging applications where direct contact isn’t involved. 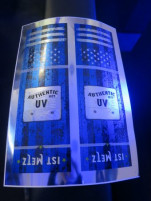 To showcase what LED UV is capable of, IST Metz ran live jobs on two LED UV-equipped presses — a seven-color Heidelberg CD 102 sheetfed machine and a VIVA 340 narrow-web label press from Codimag — throughout the four days of the event. From these demos and other briefings came a number of technology updates:

For industrial applications, IST Metz showed a tabletop laboratory unit for irradiating samples with UV emissions; and, resembling a cordless power tool, a mobile wireless LED UV handset for spot work. The company will exhibit at Print 17 in booth 652.