But with its ability to provide converters with single-pass production that combines multiple processes, hybrid printing is on the rise in the label segment. And now that multiple standalone and retrofit hybrid solutions for label converters have hit the market, the technology is beginning to emerge in the folding carton segment as well.

According to Dave McConnon, VP of operations, label and card group, for Meyers, a Minneapolis-based label, card, signage and display company, the rise of inkjet had led the company to investigate digital technologies. But, he explains that standalone digital didn’t quite provide the solutions Meyers needed. In August of 2017, the company joined the ranks of label printers investing in hybrid digital/flexo technology with the installation of an MPS EF SYMJET Powered by Domino.

“We saw inkjet technology really developing and becoming better in its quality and speed, and we saw an opportunity to shorten run lengths and provide quicker turn times for our customers,” McConnon says. “But, just the inkjet engine doesn’t offer all the decorative effects you can add to a label, at least not in-line … we saw hybrid as an opportunity to combine the in-line decorative features that a flexo press offers with inkjet capabilities.”

According to Bob Leahey, associate director, Keypoint Intelligence-InfoTrends, hybrid devices provide a solution that is helpful and profitable for many label converters. A company’s mix of print jobs, its existing print technology, or both, can make a hybrid press an attractive option.

Mark Andy’s Digital Series is among the hybrid solutions for the label segment that have hit the market, combining inkjet and flexographic printing.

“Label converters with a wide range of customers and jobs — a range that can vary by vertical industry, by incidence of short runs, by use of variable data, and other factors — can be a good fit for printing solutions that offer on one transport either digital printing, flexo printing, or both,” he says.

McConnon says that most of what Meyers currently produces on the hybrid press was previously run on its flexo presses. Originally, the company expected that 20% of the total work produced on the EF SYMJET would be from existing jobs, but since August of 2017, approximately 30% of the work produced on the new press is from jobs previously produced on Meyers’s other flexo presses, leaving the rest of the press’s capacity for new work.

With the addition of the new technology, McConnon says there has been a slight learning curve, particularly in prepress, where in certain situations, a flexo plate and digital file need to be built to match up with the plate and rotary screens. But after a few months with the press, McConnon says Meyers has become fully versed in the technology and its ease of operation stands out as an advantage.

“We were afraid that an operator would have to essentially run two separate machines,” he says. “We were worried about the integration between the two machines.”

But there has been no need for the worry, he says, because MPS was able to integrate its flexo device fully with the Domino inkjet device, enabling it to run as a single machine.

One of the biggest benefits, McConnon points out, is that the hybrid device takes multiple processes out of the hands of operators, including cleaning the inkjet heads with a rag and solvent. Inkjet heads are expensive, sometimes $25,000 a head, McConnon says, and they can be scratched easily. Domino has removed this risk by building in a hands-free wiping and capping system, he explains.

While hybrid technology has shown its potential to flourish in the label segment with offerings from Fujifilm, Gallus, Mark Andy, Nilpeter, OMET and more hitting the market, the technology is at its very early adoption stage in folding cartons. Some of the hybrid presses that have been announced for the folding carton segment include the Heidelberg Primefire 106 and KBA VariJET 106. 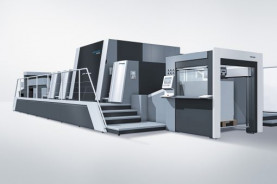 The Heidelberg Primefire 106 combines inkjet and offset technologies for the folding carton market.

Kevin Karstedt, CEO of industry consulting and research firm Karstedt Partners, explains that part of the reason why hybrid folding carton presses have been slower to emerge is because there are only a few digital options for cartons to begin with.

But as hybrid technology does begin to take shape in the folding carton segment, Karstedt says he sees its potential in taking processes that once required multiple passes and completing them in a single pass.

“To be able to do spot color varnish, braille, embossing or debossing in-line, in a single pass, and being able to be more productive and more flexible is the allure of hybrid,” Karstedt says.

Although complete hybrid solutions based on well-established offset transport systems are still emerging, Karstedt explains that some converters have added one-color digital capabilities to their existing sheetfed offset presses. He explains that this gives them the ability to add numbering capabilities and other specialty processes to their conventional printing process.

Hybrid’s Growth in 2017 and Beyond

Though Leahey explains that label converters tend to be on the conservative side in their technology choices, he expects to see hybrid adoption grow in the label segment in 2018 and beyond. However, he says that standalone inkjet systems have many more placements and a much greater installed base than hybrid systems do. He adds that both printer types are growing steadily, but overall, the standalone systems will continue to dominate the inkjet label web market in terms of numbers.

McConnon sees an opportunity for growth with hybrid technology due to the fewer large runs and inventory programs that were prevalent in the past. Additionally, he says an increase in artwork turnover and regionalization provides a great fit for hybrid’s growth. “Absolutely hybrid is going to grow,” he says. “It fits a nice niche in between a digital and a flexo asset in terms of run length and speed.”