Go Ahead … Give These Gremlins Water 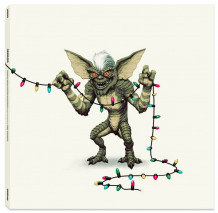 You know what they say about gremlins: keep them out of the light, don't expose them to water and whatever you do, don't feed them after midnight.

In an email to packagePRINTING, the companies explained that the packaging was printed using offset technology, with spot photochromic UV ink on the gatefold jacket, which reveals the destruction of Stripe when exposed to light. It wasn't just any UV ink though, it was a custom-made blend of orange and red used to get the desired effect. 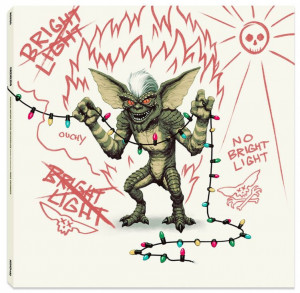 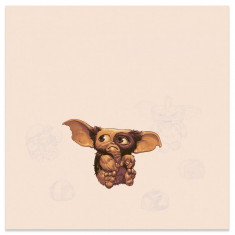 Gizmo knows what will happen if he gets wet. Image courtesy of Mondo

The inner sleeves are water-sensitive, with hydrochromic UV ink that reveals hidden images of Gizmo, and recalls the scene of Stripe multiplying as he plunges into the YMCA pool. The challenge in printing these inner sleeves was hiding the "reveal" artwork as much as possible while maintaining the integrity of the the static images of Mogwai and Stripe plunging into the pool. The companies explained that hydrochromic UV ink is white but not completely opaque, requiring three hits of the ink to be applied. Experimentation with its opacity was needed, with an additional "knockout" of the static or "always revealed" art. 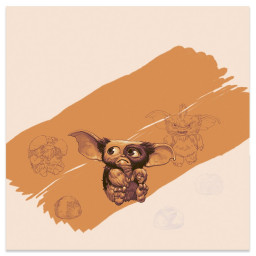 The sleeves are made from regular card stock, so the companies recommend using a slightly moist sponge to reveal the hidden images and avoid damaging the material. And as the Mondo website states:

Water and hot temperatures are as bad for records as they are for Gremlins, so please be mindful when playing these records. 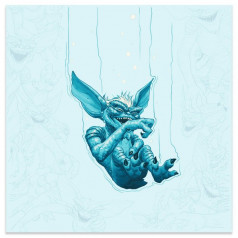 Stripe plunges into the pool. Image courtesy of Mondo

Mo Shafeek, production manager for soundtracks at Mondo, explained that the idea for the project came from a collaboration with Justin Erickson of Phantom City Creative. Both are big "Gremlins" fans, and Shafeek said that they remembered UV sensitive inks, which were popular in 1980s packaging. They decided to see if they could make it work in 2016 and the rest is history. With some pretty awesome results to boot. 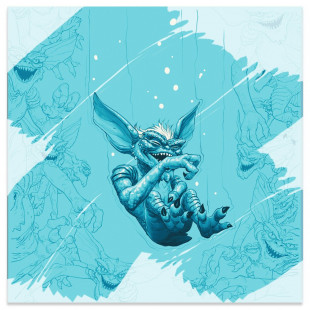 Migrating to Safety: Progress in Inks for Sensitive Packaging Applications