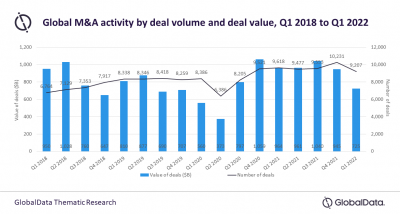 Global merger and acquisition (M&A) activity has clearly weakened in the first quarter of 2022, according to GlobalData, with total transaction value dropping to $725 billion—almost 23% lower than Q4 2021. The leading data and analytics company notes that this is a sign that activity is going back to ‘normal’, after the staggering growth seen in 2021.

GlobalData’s latest report, ‘Mergers and Acquisitions Deals by Top Themes and Industries in Q1 2022 – Thematic Research’, notes that a total 9,207 M&A deals were announced in Q1 2022, representing a drop of 10% from the previous quarter. Meanwhile, the number of mega-deals (valued greater than $1 billion) fell by a third.

Snigdha Parida, analyst on the Thematic Research team at GlobalData, commented: “M&A deal activity has seen a dismal start to 2022, with activity in Q1 registered lower than every quarter in 2021. This is largely due to the dissipation of the COVID-19-driven boost to deal-making and the broader economic outlook. We will now start seeing things return to ‘normal’.

“Looking at the current mix of macro-economic conditions, geopolitical uncertainty, supply chain disruptions, and other factors, deal-making in the coming quarters of 2022 will continue to face significant challenges.”

Sectors such as technology, media and telecoms (TMT), apparel, banking and payments, construction, and food service all recorded a drop in terms of M&A deal value. The one exception was the packaging sector, which witnessed growth of 32% in Q1 2022, from Q1 2021.

Bobby Verghese, packaging analyst at GlobalData, commented: “Investors are making a beeline for the packaging industry, which has made windfall gains from COVID-19 and geopolitical conflicts. More small and mid-sized businesses are poised to consolidate to realize manufacturing and cost synergies to address changing demand dynamics in the new normal.”

Parida continued: “The overall fall in M&A activity came, despite a number of large deals of more than $10 billion—mostly from the TMT sector. Examples included the acquisition of Activision Blizzard by Microsoft for $68.7 billion; Citrix Systems acquisition by Evergreen Coast Capital and Vista Equity Partners for 16.5 billion; and Elliott Management, Evergreen Coast Capital, and Brookfield Business acquiring Nielsen Holdings for 16 billion. TMT continued to be the biggest sector, in terms of both M&A deal value and volume, with 3,006 deals worth $273 billion recorded in Q1 2022.”

One aspect of GlobalData’s research is to study Themes. Themes are key aspects set to impact future businesses and companies. Companies who invest in the right themes become success stories, while those who miss the big themes end up as failures.

Parida added: “The top themes driving key deals in the TMT sector in Q1 2022 were the cloud and the metaverse. The biggest deal of the quarter—the $68.7 billion acquisition of Activision Blizzard—reflects Microsoft’s focus on the emerging metaverse theme, which sets a precedent for other companies. Tech giants will start engaging in billion-dollar M&As to position themselves in the metaverse— a mega-theme that will revolutionize digital media.”

When Is Customer Concentration an Advantage?

M&A Directions: Some Light After a Long Shadow