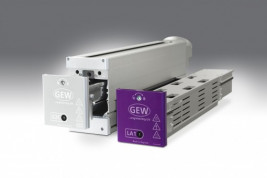 GEW is a leader in the design and manufacture of advanced UV curing systems for the label printing, coating and digital printing industry. With the advances in UV LED technology, the use of UV LEDs for curing in the printing process has become increasingly visible throughout the industry. GEW has taken LED curing one step further by introducing a fully air-cooled LED UV lamphead.

Since their inception, UV LEDs have been overcoming a number of technical and economic obstacles that prevented commercial acceptance. Relatively high initial cost and limited availability of LED inks were the main barriers that prevented their general adoption across the industry.

The barriers to adoption have now been lowered further. After an intense development period, GEW has now introduced the new, fully air-cooled LED UV curing system lamphead LA1. Special consideration was given to the enhanced airflow design to ensure effective heat dissipation at high power levels. The LA1 is built around the same proven cassette-based design as the E2C and LW1 lampheads and is fully compatible with existing ArcLED systems without the need for external chillers, pipes or coolant or any other modification.

Within an ArcLED system, printers are able to operate full hybrid UV curing, working with both mercury arc and LED lamp technology on the same press. Mercury arc cassettes and LED cassettes both use the same lamphead casing, the same power supply and the same air cooling ducts. The operator simply swaps the required cassette and the RHINO ArcLED power supply automatically recognizes which type of cassette is installed in the machine, switches from low voltage DC power for the LEDs to high voltage AC for the arc lamps and changes the display on the RHINO touch screen control accordingly.

The LA1 is an LED UV curing solution that is able to perform without the heavy infrastructure and maintenance required by water-cooled LEDs while enjoying the benefits of the efficiency, reliability and extended life cycles of LEDs.

The RHINO ArcLED power supply is extremely energy efficient showing considerable energy savings when compared to conventional electronic power supplies. ArcLED gives the possibility to run a truly flexible hybrid curing system. Several printers have already doubled the productivity of their machines by optimizing curing to best suit each process on their presses.

The ArcLED UV curing system is the only truly futureproof technology for upgradeability of arc lamp to LED UV systems. Printing presses that operate with ArcLED technology can now be upgraded from arc lamps to LED to fully exploit the advantages of both technologies with the same power supply, controls and cooling system. This will give the user maximum freedom and flexibility and will avoid getting locked into one type of curing technology.