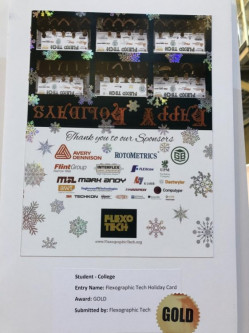 Comments from the judges included, “we were impressed with this piece! Registration tolerances are extremely high. The hoops the press team went through to achieve this gorgeous piece are highly admirable – Way to go!”

This card was printed on a 23-year-old, gear-driven Mark Andy 2200. No traditional cold foil equipment was used because of where the cold foil was introduced to the web, allowing for yellow and magenta to be printed on top of the cold foil.

The installation of many idler rollers (using C-clamp on the press frame) to achieve the proper web paths was also necessary. Process magenta and yellow were printed on top of the silver cold foil (in stations 7 and 8) to give the illusion that multiple color foils (red happy holidays and gold Flexo Tech logo) were used on the card.

The cold foil adhesive was wicking into the C2S material, so we needed to run a 300 cpi 8.52 bcm anilox roll to allow for good cold foil adhesion. With this much ink, the impression on this clear cold foil UV adhesive had to be set perfectly or the cold foil would look smashed losing some of the fine detail on the snowflakes.

The card had extremely tight registration due to the logos on the back and the detail in the 4CP images. The press does not have any camera or auto-register system so the students had to maintain the registration by hand and keep a vigilant watch throughout the entire press run. The registration of the sheeter die with the scoring blade (to fold the card in half) was also critical and needed to be watched closely. The graphics required precise plate mounting to allow for the tight registration. Moreover, the card was run on 14pt C2S stock (this is the manufactures limit for stock thickness on this press) The turn bar was also used so we could print the inside of the card. Achieving proper tension was tricky and required the tension system to be maxed out on the press. Tension played a critical role in the press run for registration and the cold foil application. The press is not equipped with a transducer and uses a traditional dancer/break tension system.

Lastly, because the card was run on a 23-year-old geared press, gear marks on this type of graphic can be a real challenge. Half inch bearer bars were used on both sides of the plate to help reduce bounce and the appearance of gear marks.

Flexo Tech instructor Shawn Oetjen notes, “This is the third year in a row that Flexo Tech has taken top honors in the prestigious print competition. Although Flexo Tech is a newer addition to flexographic education, students are learning award-winning print fundamentals.”

Flexographic Tech’s role in training press operators is vital to the future success of the flexographic printing industry. The demand for the trained operators increases daily, as more people retire and fewer people enter the industry. Oetjen notes, “Every week I get more and more calls from printers looking for flexographic press operators. Some of these individuals are in a real panic and as the lack of operators is negatively impacting their business. Sadly, this problem is only going to get worse over the next decade if we do not train new operators.” According to JP Morgan Chase, There are currently 5.6 million unfilled jobs in America and that number is predicted to skyrocket to a staggering 16 million in 2024.