Digital printing and production technology is making its mark in the corrugated segment, providing converters and their customers with unprecedented opportunity.

If this article was a relationship, it would be a second date. The introductions have been made, and the sense of the “who” and the “what” of the relationship is much more firm. With the green light to move forward and connect again, the motivation moves from the introduction of strangers to a broader feeling of “let’s move ahead and see where it goes.” The same can be said about digitally-printed corrugated packaging. It’s no longer a question of whether one party (the process) and the other (the packaging segment) can connect — they already have. It’s now a question of how the relationship will transpire over time.

This article explores the state of the digital corrugated segment today. Through the insight of two noted industry experts and a company currently taking advantage of the benefits of the process, it looks forward, offering a near-term view of what’s to come. They are Mike D’Angelo, president of AICC, The Independent Packaging Association; Zac Suprenant, marketing director of Bennett Packaging, and Jeff Wettersten, president of Karstedt Partners, LLC.

For the corrugated segment, digital printing technology has arrived, offering true opportunity to those converters looking to move forward. Mike D’Angelo says that for corrugated, digital printing has become a choice for all producers to make. He says that today’s converters are always thinking about the digital choice, and it has gained a “seat at the table” along with other printing methods. Part of this, he adds, is that, “vendors have done a great job sharing the gospel,” noting that the technology and the opportunity continue to evolve.

Zac Suprenant says that while the technology has fully arrived and is meeting its promise, the current challenge to more widespread adoption is that many companies haven’t found a way to sell it successfully.

“Misinformation among customers is a liability,” he says. “We need to tell them what’s what.”

By doing so, he says, converters can unlock the creative possibilities of digital, thus opening the opportunity.

The State of Things

For the segment and its technologies, D’Angelo says that digital is certainly growing in corrugated, and that early adopters are now on their second or third generation machines. For these producers, he says, the experience has been largely about finding “new ways to deliver print, not just to replace existing work.” He says digital printing in general, and inkjet in particular, is an accepted technology in the segment, that digital presses are selling, and that even late adopters are now getting in. Wettersten notes that the technology has worked well for litho conversion work, and in displays, where it has replaced the use of litho or flexo processes. 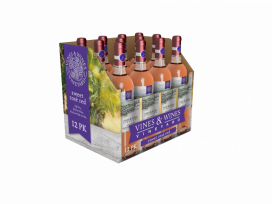 Among the products digitally printed at Bennett Packaging is this wine box, which serves as both shipping container and, when opened, an advertising display. Image courtesy of Bennett Packaging.

“While display has been the primary home for digital print, volumes are transitioning it toward cartons,” he says.

Regarding Lee's Summit, Mo.-based Bennett Packaging, Suprenant says the company’s focus is on specialty applications, not just “brown box” manufacturing, and that it is one of the largest independent packaging companies operating in the United States. Bennett Packaging was an early adopter of inkjet technology for corrugated, making its first investment in 2016 with the installation of a Barberán JetMaster 1260. This investment was followed with another machine from Barberán — a JetMaster 1680. Using these technologies, the company has produced packaging elements and custom displays for Pokémon, Magic: The Gathering, and Hasbro, as well as packaging for Walmart and Costco.

Wettersten says that versioning is driving much of the opportunity in the corrugated segment. Because of this, he says there is much more discussion about customization, and that retailers and marketers are exploring more cross-marketing opportunities made possible by the technology. D’Angelo says many digitally-equipped converters are producing subscription boxes, shelf displays, and elements for e-commerce. He says the technology is giving retailers and the marketers the opportunity “to regularly change the look of their pitch.”

Addressing the primary motivation for converters to add digital printing, Wettersten says that it first has to be good for the customer. In some cases, he says, the addition of the technology brings overall process improvement, and converters envision both a clear path to market and strong return on investment. Others, he says, may be seeking to innovate and forge new market opportunities. D’Angelo says many producers are using the technology more to serve existing customers differently than to seek new customers.

Suprenant says that Bennett Packaging’s tagline, and a testament to digital printing, is it is where “imagination meets corrugation,” and that Bennett Packaging made a concerted choice to innovate. He says that adding digital has helped the company offer more to its customers and help them bolster their brands. He is of the opinion that many companies operating in the digital corrugated space are selling based on specifications and capabilities, and not on helping customers realize new opportunities — a profound difference in approach.

In seeking to build the value of digital printing, D’Angelo says, converters need to add in the technology aspect, and help their customers engage consumers in a different way. He says that during the COVID-19 pandemic, brick-and-mortar retailers were forced to make strong moves into e-commerce, and sought new ways of engagement in doing so. Further, he said that digital corrugated printing is now seeing double digit growth year-over-year. Wettersten reports that while companies often enter the digital opportunity to do jobs that are easy to convert — providing short runs, for instance, where they were not previously viable; those companies that have matured in this area are now able to “develop a discrete digital market around customization and personalization that only digital can provide. This is where differentiation at scale exists.”

A strong opportunity for Bennett Packaging, says Suprenant, is the move toward making a more “eco-friendly” product. He said that digital production can make a company more efficient overall, and provided an example where the use of digital printing methods reduced box materials by 25% and resource use during production by 20%. He says that for companies looking to tout their sustainability pedigree, digital gives them a measurable, factual message. Suprenant said the other strong opportunity for Bennett Packaging is the opportunity to promote marketing innovation. He says the company’s trajectory was first to focus on short runs. As a marketing professional, he says that the ability to change the look of packaging or displays, seasonally, for instance, is an approach deep in opportunity and worthy of exploration.

Regarding color and print quality, D’Angelo says that while inkjet does well in producing high-quality graphics, many customers are used to the look of well-produced flexographic printing, and are accustomed to very good graphics. “So, high graphics are not necessarily the hook.” Suprenant says that Bennett Packaging’s digital presses are meeting expectations, and that “printing quality is up to par for what customers want.” He said that the addition of a color management professional and an ongoing effort toward customer education helps the company avoid color or quality-related production speed bumps. He says that while customers are not asking for different products because digital printing is in place, they are often very open to learning about new opportunities and possibilities, and making choices based on what they learn. “Educating our customers is important,” he says, adding that it’s often about trying to change customer thinking from, for instance, one long run to 12 individual, smaller campaigns.

Beyond the possibilities, Wettersten says, are the benefits of a different process. He says that digital production can “bring a dramatic reduction in lead time,” which can be highly attractive for time-sensitive product releases or special promotions, especially as the speed and granularity of marketing efforts increase. Wettersten added that the use of customization is increasing among boutique and niche brands — an opportunity exclusive to digital production. 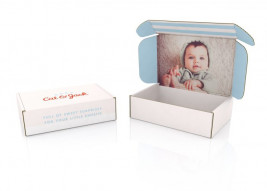 Digital printing on corrugated is seeing increased use in e-commerce applications. This box, printed inside and out, provides branding and context. Image courtesy of Bennett Packaging.

E-Commerce, Suprenant says, is what he is most excited about. He reports that following a redesign of the company’s website and the addition of a well-thought-out interface for approaches by potential customers, the company has seen a 74% increase in acquisition of online prospects. He said it also gave a voice to both the customer and the job, strengthening initial connection and understanding. The goal ahead for Bennett Packaging, he says, is to streamline its job management system in advance of the installation of an online storefront, scheduled to launch in 2022. The storefront, he says, will focus on standardized items.

For companies seeking to add a digital press to their corrugated printing offerings, Suprenant says, “Know your customers, and know who would be interested in what digital can do. Initially, digital was not the right fit for some customers.” The goal, he says, was to verify and sell the rightness for digital and its possibilities. “Make sure you speak the language of the customer,” he says, “and not of the converter — and be sure to play up the benefits of digital.”