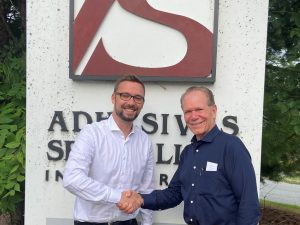 EUKALIN, a member of EUKALIN Group and a manufacturer of adhesives for the paper and film converting industries, announced it has acquired 100% of the assets of Adhesives Specialists, located in Allentown, Pennsylvania. Established in 1983, Adhesives Specialists, Inc. (ASI), a manufacturer of both water-based and hotmelt adhesives, operates out of a 40,000 sq. ft. facility and supports customers across the United States. Its manufacturing operation produces adhesives for applications like bottle, can and jar labeling, food packaging, carton sealing, paper bag forming and foam bonding. After this transaction, the operation will be known as Adhesives Specialists, A Division of EUKALIN Corporation.

EUKALIN in Germany is one of the leading adhesives producers for paper and film converting worldwide and has also been active in the North American market with EUKALIN Corporation since 2008, focusing on the envelope, packaging, and industrial sack segments.

“This is our first acquisition outside of Germany,” said Jan Schulz-Wachler, president of EUKALIN Corporation. “We were looking for a company in the United States that could help us respond to the growing needs of EUKALIN's North American customers and fits with our corporate philosophy. It was important not only to acquire a production facility, but also add further technology and expertise in the area of water-based adhesives and hotmelt adhesives. Our goal is to strengthen our strategic presence and after a short transition period start manufacturing EUKALIN products using local raw materials.”

“I am proud of what ASI has built and accomplished over the past 40 years with our people, relationships, customers, and suppliers,” said Steve Russo, ASI’s owner. “It was important to me that Adhesives Specialists could continue to grow and thrive as part of the EUKALIN Group, and I am confident our new relationship with EUKALIN will allow us to both capitalize on significant growth opportunities.”

“In addition to shortening cycle times for our customers, this acquisition offers a significant growth opportunity for us in North America,” said Mike Frost, EUKALIN’s North American Sales Leader for the envelope and traditional EUKALIN market segments. “Driven by the growth we have experienced over the last two to three years, adding U.S.-based manufacturing capacity was our next logical step.”

EUKALIN was supported by New Direction Partners on this transaction.

Why It’s Still a Good Time to Buy/Sell