The turning point was right around March 10, Kevin Kelly says, when consumer behavior around packaging began to change. As the coronavirus pandemic reached the United States, consumers quickly shifted their attention to acquiring household necessities, and approached shopping with an increased sense of caution. 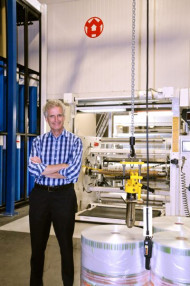 Kevin Kelly, CEO of Emerald Packaging, with one of the company's printing presses.

Kelly, CEO of Emerald Packaging, a flexible packaging printer and converter in Union City, Calif., says that this rapid change in consumer behavior had an immediate impact on his Bay Area facility, with demand skyrocketing and March bookings jumping 135%. Emerald Packaging prints a variety of flexible packaging for several market segments, including a substantial amount of business in produce packaging. With heightened concerns surrounding the spread of the coronavirus, Kelly says many consumers began opting for packaged produce with the mindset that the extra layer of packaging is protecting the items inside.

“People are buying produce, but they’re buying it in packaging,” Kelly says. “People aren’t buying unpackaged produce as much as in the past. They’re worried about health and safety.”

While there have not been indications that the virus can spread via unpackaged produce in a grocery store environment, Kelly says that the added peace of mind that packaging gives consumers has been a component of the increased demand. As an essential business, Emerald Packaging has remained open to be able to meet that demand, but with added precautions in place.

Office staff that have the capability to work remotely have been sent home, while those coming into work are required to wear a mask and follow social distancing guidelines. Meanwhile, Kelly says all machines are being cleaned before and after each shift. With demand up, Kelly says the downtime to clean machinery and safely transition between shifts has led to challenges, but explains that investment in additional labor has helped alleviate the obstacles.

In addition to providing overtime to current Emerald Packaging employees, Kelly says that the company has been able to fill multiple job openings. Of 18 positions that were open at the start of the pandemic, Kelly says eight have been filled, as the dynamics of the workforce change as a result of other businesses shutting down.

“The labor market is pushing people to look at manufacturing as opposed to the service industry,” Kelly says. “We’re increasing overtime while dealing with downtime. Job changeovers on our printing presses have gone from three job changes a day to eight or nine a day just to get jobs out the doors.”

Meanwhile, Kelly says the company is working on balancing the increased workload with employees’ increased need for flexibility in their work schedules. In addition to coming to work under strained circumstances, he says that many employees are juggling increased household challenges including looking after kids who are home from school, or providing care for an elderly relative.

To help meet these personal needs of employees, Kelly says Emerald is introducing an extra day off for the entire plant, as well as hardship days that staff members can apply for to provide care for family members.

But as an advocate for the benefits of flexible packaging, Kelly says that a potential silver lining of the current circumstances is an increased appreciation among legislators for the benefits that packaging provides. To contend with the backlash against plastic packaging among consumers and lawmakers, Kelly says that prior to the pandemic he was a frequent visitor to California’s capital in Sacramento to advocate for the good that flexible packaging can do.

Now that consumers are increasingly opting for produce packaged in plastic, Kelly says that he expects that this firsthand experience with flexible packaging’s food preservation and protective attributes will lead to increased appreciation.

“Conversation has changed so dramatically,” Kelly says. “When I go back up to Sacramento, I’ll be able to talk about packaging and its importance and I won’t be revealing things. They’ll understand and respect it.”

Podcast: How the Packaging Industry Banded Together to Donate Millions of Face Shields

Packaging Trends Through the Consumer’s Eyes