With the help of digital and conventional technologies, converters are giving this tried-and-true packaging material a new look and a new relevance that adds value for brands and consumers alike.

Corrugated packaging, once largely considered to be a bland packaging format, is shedding its staid, brown-Kraft image for a bright new look that pleases consumers and strengthens brands. Thanks in part to demand arising from the e-commerce explosion, current production of corrugated board isn’t far off some of the highest levels it’s ever achieved. And converters — both those embracing digital printing and those staying with conventional output — are cashing in on the opportunities that the intersection of these trends creates.

Small wonder that the Fibre Box Association (FBA), a trade group representing the producers of nearly all U.S. shipments of corrugated, is running a campaign that lauds the corrugated box as “the most extraordinary ordinary thing in the world.” Market data supplied by Rachel Kenyon, FBA vice president, shows that an upsurge in production reflects corrugated’s rising profile among brand owners and consumers alike.

According to FBA’s industry annual report for 2018, corrugated producers shipped nearly 393 billion sq. ft. of the material that year: the fifth-highest total annual volume since year-over-year comparisons began in 1971. Except for one year (2013) when growth was flat, volume has been ticking modestly but steadily upward since 2010.

As Much, with Fewer

Driving the growth are evolving perceptions of what corrugated is capable of as a packaging medium. Kenyon says now that converters have a greater range of options for printing and decorating corrugated containers, fluted board can take advantage of “the versatility that has always been there. Corrugated really lends itself to all of this customization.”

Traditionally, says Jeff Wettersten, president of Karstedt Partners, a packaging consulting and research firm, “the pedigree around corrugated has been for the transport of bulk shipments.” But that is changing, he asserts, as retailers see how often corrugated works better on the shelf than folding cartons, especially for bulky and heavy packaged goods.

The reputation of corrugated “has definitely been elevated” thanks to advances in technologies for producing it, says Richard Brown, president of The BoxMaker in Kent, Wash. He says customers for whom he prints with an HP PageWide C500 direct-to-board digital press have come to regard corrugated packaging as “owned media” for brand communication “on a box they already own.”

Precision Digital Printing, a start-up in Jonesboro, Ark., has been in operation for little more than a year. But even in that short time, notes Troy Best, VP of sales and operations, in a written response, “we have watched the industry change their perception as to how they view graphics” on corrugated packaging.

‘No Limitations’ with Digital

At Precision Digital Printing, this has been due in large part to the EFI Nozomi C18000 digital corrugated packaging press the company installed in May of this year. “Now with digital, there are no limitations,” Best says. “If the customer wants 50 colors on a display, we can achieve that.” 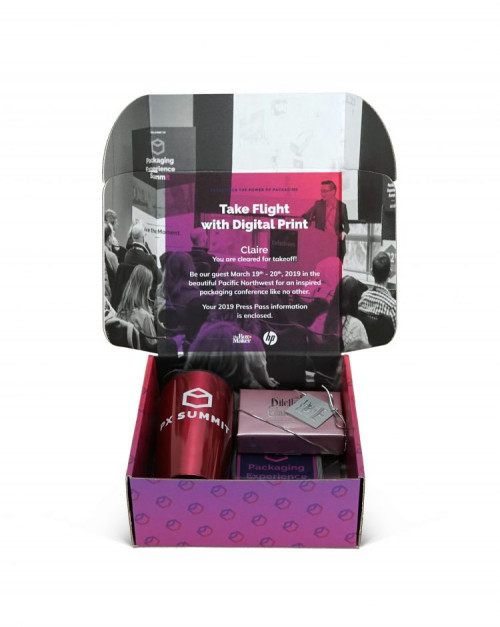 “The old idea of staying within a four- or six-color format are quickly eroding, and we see most of our customers converting everything they can to digital based on the sheer ease and speed to market,” he adds.

Perceptions can also change in the absence of digital printing and high-end graphics. Specializing in industrial packaging with a strong emphasis on structural design, Reliable Container of Addison, Ill., mostly produces “typical brown-box packaging with one- to two-color printing” on flexographic equipment, according to Tom Murphy, director of marketing.

But, owing to increased demand from the company’s e-commerce clients, “it seems like everyone shipping directly to consumers wants printing on the inside of their boxes now,” he says.

Brand-reinforcing touches like these can make consumers “almost giddy” with anticipation as they open the corrugated packages in which their purchases have been delivered, says Murphy. He also thinks that the non-industrial look and feel of e-flute board and other microflutes will help to cultivate a high-end image for corrugated as brands and consumers become more familiar with these substrates.

The strong consumer spending that drives online shopping has been “very positive for the corrugated industry,” Wettersten notes. Kenyon points out that as more people receive home delivery of products they order intermittently and by subscription, awareness of the packaging increases. This is why she sees “a whole frontier” of opportunity for customized corrugated packaging as purchasing habits change. 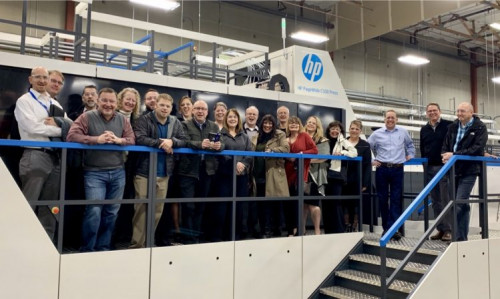 The BoxMaker sales team and leadership pose with the company’s HP PageWide C500 direct-to-board digital press, the first of its type on the West Coast

Although e-commerce is giving a powerful boost to the use of corrugated, it isn’t supplying all of the segment’s present momentum.

According to Brown, some of the biggest opportunities for The BoxMaker’s custom corrugated business over the next several years will come from its “ability to integrate innovative technologies into packaging.” These applications include variable printing, personalization, and what he calls “connected packaging”: boxes with features for extended content presentation, track-and-trace functionality, and anti-counterfeiting protection.

Market realities and customer requirements shape the business models that corrugated producers follow. As its name indicates, Precision Digital Printing isn’t a converter per se: it’s a direct-to-the-trade, all-digital printing house that leaves the converting to its clients.

“While there are many converters in the marketplace, there are few with access to high-end graphics,” Best asserts. “We offer a service to our customers that allows them to have access to digital print while being seen as a partner supplier rather than as a competitor, which is why we do not have any converting equipment.”

Instead, it concentrates on high-quality, single-pass production with the EFI Nozomi C18000, on which it prints corrugated, Coroplast, and other rigid materials at speeds up to 246 linear fpm. Best explains that single-pass, direct-to-board printing can be a more efficient alternative to laminating lithographic overprints, or labels, onto corrugated surfaces.

“Once we have a good Illustrator file, the speed to market is significantly reduced compared to litho,” he says. “A large portion of our orders are very large blank sizes — often something too large to label, or that would require multiple labels, hand-applied. Digital print eliminates those hurdles and provides a very cost-effective option in those scenarios.”

Brown says that since installing the West Coast’s first HP PageWide C500 direct-to-corrugated press last January, The BoxMaker has shifted from 10% to 20% of its corrugated volume to the device (traditional flexo accounts for the rest). Digital production has eliminated plate costs, delivered offset-quality printing, provided an alternative to litho lamination, and freed customers from minimum orders.

‘We Do It Every Day’

Now, Brown says, “our minimum order is essentially one. We do it every day.” A run of one on the 246 fpm thermal inkjet press might be a proof, “just one floor display, or one shipper to take to a show.” The fact that the press, which can process boards up to 51.9x98.4˝, is also built for high-volume output means that “everything from one to a truckload” can be printed on it, Brown adds.

But, he notes that while digital production can be liberating, “this is not for the faint of heart” in terms of machine utilization. Converters used to owning and operating their flexographic equipment for 20 years will have to get used to the much shorter technological life spans of digital systems, he explains.

Wettersten concurs that digital printing is “a different world, and a different mindset” from what corrugated producers are accustomed to. He says Karstedt Partners is investigating whether a gap exists between the demand for digitally printed corrugated packaging and the capacity to produce it, based on profiles of operations comprising 36 single-pass and 70 multi-pass press installations.

Murphy says the main reason Reliable Container doesn’t print digitally is that it hasn’t been involved in high-end graphics. However, he acknowledges that the technology “has caught our attention” and could figure in future plans. For the time being, the company is partnering with a digital printer that it can turn to for small-quantity jobs it can’t produce internally.

However, given Reliable Container’s core competence in structural design, and in view of the fact that the company has no minimum order requirements, there isn’t much that it can’t produce in-house. Murphy says the company’s Kongsberg sample making table is kept busy all the time fabricating prototypes and samples that help customers re-engineer their packages for better performance and economy.

The solutions play directly to corrugated’s strengths. Murphy relates that in one project, Reliable Container streamlined the shipping and pack-out of a food item by replacing chipboard overboxes with e-flute containers that could be palletized and shipped directly to consumers. This eliminated the need for reusable shipping containers and permitted the brand to print directly on the corrugated shipper.

‘Swoop in’ and Profit

Murphy believes that problem-solving like this opens “tons of opportunities” for converters like Reliable Container to “swoop in” and pick up business that International Paper, WestRock, and other large, integrated converters are leaving behind as they concentrate on the Amazons and the Walmarts of the world. “A company that may have been a little fish in the book of business at an integrated may end up being a big fish for a smaller company like Reliable,” he observes. 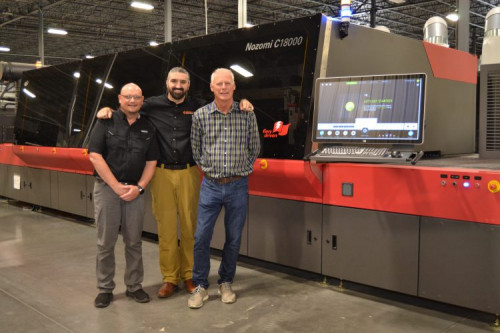 As in every other print market segment, ingenuity is the key to success for corrugated producers. Brown notes that as the site of what he calls the Pacific Northwest’s highest-capacity digital production center, The BoxMaker is continuously challenged to stay ahead of the complexity of its “one to truckload” workflows. This is why the company relies on a team of six IT specialists to optimize its proprietary order-processing routines.

Other challenges, however, aren’t as readily addressable by technology. Kenyon says that the ever-present issue of recruitment and retention “is the No. 1 thing that our members tell us.” Wettersten agrees that in a tight labor market, “it’s hard to bring a millennial into a corrugated converting facility” and make that young person see it as an attractive place to work.

One area in which corrugated packaging doesn’t have an image problem is sustainability. Kenyon says that with a recycling recovery rate of 96% in 2018, corrugated is “a wonderful example of circularity” in package remanufacturing. Fully half of the recovered fiber goes into making new boxes, she notes.

Sustainability is of “huge concern” to brands, according to Brown, who says that The BoxMaker’s corrugated customers are open to exploring ways of achieving it. For Reliable Container’s customers, likewise, the green advantages of corrugated go without saying.

“We don’t have to preach that, or even bring it up, because it’s pretty well ingrained that corrugated is more recyclable than foam, packaging peanuts, and bubble wrap,” Murphy says.

The Target Report: Catching the Wave in Corrugated Cartons