The Independent Carton Group (ICG), an association of independently owned and operated folding carton manufacturers, is pleased to announce that Carton Craft Supply is the recipient of its Supplier of the Year Award for 2018. 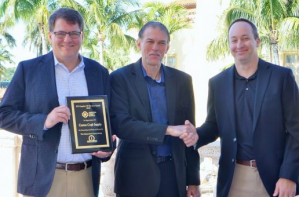 The ICG’s Supplier of the Year Award was presented at The Biltmore, a historic luxury hotel in Coral Gables, Florida, during the ICG’s general membership meeting, which was hosted by ICG member Vista Color of Miami. Carton Craft’s Mark Doxtader, owner and president, and Rick Ruckh, account manager, were in attendance to accept the award from the ICG.

“We are honored to have been selected from among some of the largest and most recognized names in the industry as the recipient of this award,” said Doxtader. “In business, people don’t often reach out simply to say, ‘you’re doing a good job.’ It means a lot to me that my team is being celebrated for their hard work and dedication to the ICG and its members.”

Carton Craft became an ICG supplier in 2006, and since that time, it has continually expanded the portfolio of diecutting, die making and converting equipment and consumables it offers to ICG members. The company is committed to delivering the latest technology, highest quality products, and first-class customer service and technical support. Carton Craft technicians across the country work closely with customers to ensure successful trials and testing of new products.

Doxtader said he values the relationship his company has built with the ICG over the past 13 years, noting that ICG members are some of the industry’s most innovative companies. “There’s a special kind of spirit within this group of independents, out there fighting the good fight, continuing to build something for their employees and families. We’re happy to support them.”

Carton Craft is one of more than 40 reputable companies providing equipment and materials to ICG members through the group purchasing program, which was introduced in 1999. The ICG’s Supplier of the Year Award is presented annually to the supplier that receives the highest marks on evaluations completed by members for the prior calendar year. ICG members rate suppliers on quality, delivery, accuracy, service, expertise and other key performance metrics.

“Carton Craft received high ratings in all evaluation categories, and they clearly have members’ best interests in mind when it comes to introducing innovations that accelerate quality folding carton production,” said Jay Willie, executive director of the ICG. “We congratulate them on this well-deserved recognition and look forward to their continued contributions to our group.”