Budweiser's Big Year in Packaging Rolls into the Holiday Season

In the age of craft beer and small-batch brewing, one of the largest and most recognizable beer brands in the United States has been able to have itself quite a year — and is doing so via its packaging.

When Budweiser announced this summer that its iconic cans would no longer bear its own name, but would read “America” instead, it seemed that everyone had a take on the bold, bluntly patriotic packaging. Check out this video from our friends at Target Marketing, which offers two views on the packaging alteration.

Then, when football season kicked off, Bud Light joined the packaging fun by releasing cases and cans emblazoned with the logos of all 32 NFL teams. The catchy slogan of “Beer With Your Team On It” and football fans’ desire to drape themselves in their favorite team color more than likely has had thirsty football fans reaching for Bud Light this season.

Now, with the holidays upon us, seasonal spirit is joining patriotism and football fandom. According to a press release from Anheuser-Busch, the limited edition aluminum bottles will be completely red, aside from the Budweiser logo, which will be written in white. The other traditional  Budweiser branding elements will appear in a brighter, metallic shade of red.

While Budweiser has been bucking traditional packaging all year, the press release states that this new seasonal packaging was inspired by a company tradition of decorating its 12 U.S. breweries for the holidays. 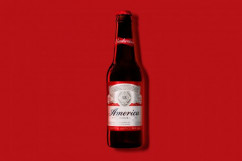 Budweiser bottles and cans removed the brand name in favor of "America" during the summer and election season. Via Anheuser-Busch newsroom.

Packaging Perspective: Seasonal beers with holiday-themed packaging is certainly nothing new. But the fact that Budweiser has made a distinct effort to take its iconic packaging and unmistakable branding and give it a few tweaks and twists throughout the year, has been fascinating to observe.

As continually improving packaging and printing technology allows brands to break away from their standard looks, Budweiser has been an innovator in reacting to cultural trends, incorporating them into its packaging and creating a renewed buzz around the 140-year-old brand.

From the press release:

In 2016, Budweiser took cues from culture to inspire new packaging looks, leading to its boldest patriotic packaging move ever with the launch of the America can followed by the Torch bottle just in time for the Rio 2016 Olympic and Paralympic Games.

With so much attention paid to social media strategy and digital brand interaction, packaging is still typically the first impression a brand makes on a consumer. By swiftly reacting to these cultural cues, Budweiser has been able to use its packaging to provide something new to attract consumers, while still providing a familiar product.