Bobst welcomed label printing and converting professionals to its Competence Center Alpharetta on December 5 to 8 for an Open House event. Label converters and printers from the U.S. and Canada came to Alpharetta, Georgia, for live demonstrations of Bobst hybrid printing solutions and to learn more about the company’s narrow and mid-web solutions.

At the event, Packaging Impressions spoke to two converting professionals from M&R Label, who were eager to learn about digitally powered printing solutions. The label printer, which is in the southern Chicago suburb of University Park, Illinois, currently has a mix of digital and flexo printing technology in house. 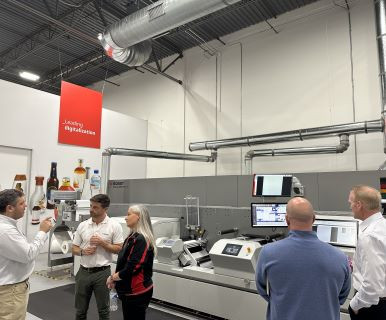 The Bobst Master DM340 made its North American debut at the Bobst Open House in December 2022.

The gentlemen explained M&R Label experienced strong growth after a management change. While a great problem to have, the growth has increased the label converter’s lead times. Previously, the label converter was able to consistently deliver product within 5 days; now that lead has increased, depending on circumstances, anywhere from 7 days to 2 weeks. The gentlemen said the new lead times still are far shorter than M&R competitors, which are working to 5- to 7-week lead times, and the desire to improve was being driven by their commitment to their customers versus external forces. Crucial to M&R Label achieving its goal, both agreed, was investing in the right digitally powered technology.

Attendees appreciated the agility of the hybrid press, which the Bobst team was proudly demonstrating, but they really were there for the press’ productivity which runs at a reported 100 m/min job after job and is available in a 510-mm web width for additional productivity.

After the demonstration, attendees had a chance to discuss their specific production needs with Bobst experts to ensure that they were matched with the correct Bobst technology for their printing operations.