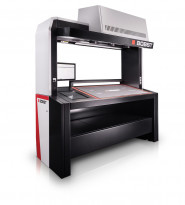 Ever since the SP 102-CE Autoplaten stole the show at drupa in 1982, BOBST’s flatbed die-cutters with cam-driven movement have paved the way for mass production of high-quality consumer goods. This year marks the 40th anniversary of the revolutionary mechanism that made it all possible. ​

“Often copied but never equaled,” is how Marco Lideo, head of product line diecutter stampers, flexo, Litho Lam describes BOBST’s cam-driven platen system, which was first granted a patent back in 1982 and subsequently launched at drupa that same year. Originally devised by inventor and engineer Georges Polic, it still remains one of the greatest innovations in die-cutting technology after 40 years on the market.

This unique mechanism for the cutting station in the Autoplaten press – which itself was invented by BOBST and launched in 1940 – has been implemented across evolutions of the company’s world-leading portfolio of flatbed diecutters. Customers across the globe have benefited from the much smoother operation and faster speeds enabled by this invention, which allowed the first SP 102-CE model to deliver a record-breaking 10,000 sheets per hour.

“Right from the very early days, BOBST has led innovation in diecutting with superior technologies and machines that supported the acceleration of the consumer-oriented market,” said Lideo. “From the early 1980s, when mass consumption first took hold, to today’s e-commerce driven society, BOBST continues to provide solutions capable of supplying products at the most competitive productivity rate thanks to revolutionary mechanisms that allow for easy integration into the substrate converting process.”

The patented cam platen technology, which is still the reference point in the industry today, drives the current VISIONCUT, EXPERTCUT and MASTERCUT 106 and 145 models, the SP 162 CER, and the MASTERFOIL 106, along with many legacy machines that have withstood the test of time. Such is the quality of the early flatbed die-cutters that many are still in operation after decades of faithful service, providing customers with enviable speeds and high productivity, year in and year out.

Success based on BOBST die-cutting technology

To mark this amazing achievement, BOBST invited a group of long-standing customers to an anniversary celebration in Switzerland, to thank them for their loyalty and commitment. Hosted at the Competence Center in Mex, the visitors were given a presentation of the product line, a tour of the factory, and the demonstration of the MASTERCUT 1.65, NOVACUT 106 with ACCUREGISTER and the Digital Inspection Table, before enjoying a celebratory lunch.

Speaking to representatives from some of the big companies that attended the event, it is clear that the BOBST die-cutting technology has contributed to the success of their businesses. This is evidenced by the fact that they all continue to put their trust in the Swiss manufacturer.

One such customer is Leopold GmbH Verpackungen in Germany, which processes more than 65,000 tons of cartons each year across its three production plants. The company has a total of 11 cam-driven BOBST machines, including five 145 PER die-cutters lined up in a row on the production floor of Works III. “BOBST is more than just a supplier. They have been a reliable partner for us for over 20 years now – from initial consultancy to operations and services – and the machines always deliver superb quality and reliability,” said Valeri Lach, head of Works III. “We serve a very wide range of segments, and the versatility, high productivity, and unbeatable product quality of the BOBST equipment help us fulfill any market requirements.”

LIC Packaging in Verolanuova, which celebrates 70 years in corrugated board production this year, is another loyal customer with a host of BOBST equipment at its disposal. Technical Services Manager R&D Renato Pietta also praised the product quality, but added, “Productivity is a given and so is the high quality; it is the longevity of the BOBST machines that is the real differentiator, coupled with the excellent after-sales service. The comprehensive Maintenance+ program continues to be an important deciding factor for us.” ​

Founded in Trieste, in Italy, in 1868, Modiano specializes in the production of playing cards and other paper products. The company has three BOBST die-cutters for producing folding carton boxes. Speaking about BOBST as a supplier, partner and innovator, President Stefano Crechici said, “I see BOBST as an innovation leader in this market; a company that is serious and a trusted partner for us. To be honest, I never really looked at the competition, because I know and trust BOBST for its reliability and after-sales service – and we trust in the proven longevity of the equipment.”

“As we celebrate an incredible 40 years of cam-driven platen technology and the many, many businesses that have benefited from this innovation over the years, we also look ahead to many more opportunities for our customers to break productivity records and secure their futures with BOBST die-cutting technology as a foundation,” concluded Lideo.