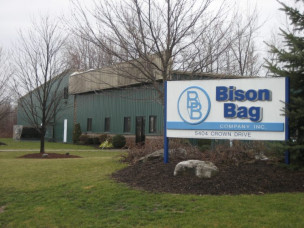 Bison Bag, a full-service flexible packaging converter with 10c printing capabilities based in Lockport, N.Y., has placed an order for a 10-color MIRAFLEX II M. This will be Bison Bag’s fourth flexographic press and its first from W&H. The press is scheduled for start-up in fourth quarter 2019.

“We’ve been growing steadily since my father started the company in his basement 50 years ago,” said Jim Streicher, Bison Bag’s COO and Co-owner with the Zgoda family. “We’re still getting bigger as a company and believe the MIRAFLEX II will take us where we need to go”.

The 52˝ MIRAFLEX II M is equipped with W&H’s fully-integrated Viscosity Control system and VISION web inspection system with Defect Check. An additional feature on the new press is the award-winning TURBOCLEAN ADVANCED E inking and wash-up system with electric pulsation-free pumps, which significantly reduce both ink and energy consumption.

“The integrated inspection and viscosity control systems were a big factor in our decision to go with W&H. You always hope things won’t go wrong, but there are hiccups. We like to know that when and if problems arise, we’ll only need to call one supplier to take care of it,” added Streicher.

The MIRAFLEX II is part of a larger expansion plan for the company. An addition to an existing building is currently underway and when finished in 2020 will bring the total plant size to approximately 140,000-sq.-ft. Other recently acquired machinery includes one pouch machine from Modern Manufacturing, two Nordmeccanica solventless laminators , an auto-mounter by J. M. Heaford and an Inno-Lok machine for converting zipper into vertical form/fill/seal rollstock from Hudson-Sharp.

The preceding press release was provided by a company unaffiliated with packagePRINTING. The views expressed within do not directly reflect the thoughts or opinions of packagePRINTING.

FTA Kicks Off Virtual Forum with Awards and Educational Sessions

Flexo's Renaissance Throughout the Packaging Industry

How Faces Behind Masks Uses Digital Printing to Bring the Human Touch Back to Hospitals
END_OF_DOCUMENT_TOKEN_TO_BE_REPLACED
Jobs
Chelmsford, MA